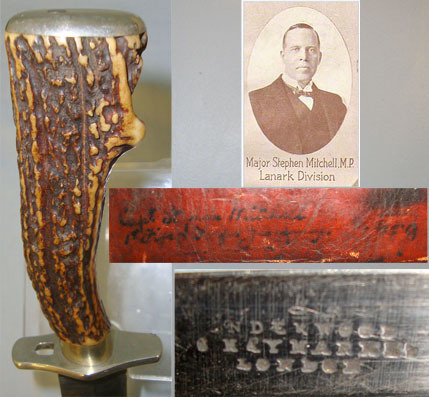 The Underwood family of London based Cutlers began their knife making heritage with Yeeling Underwood in 1791. Henry Thomas Underwood was recorded as working at 56 Haymarket between 1822 until his death in 1860. The family business continued making knives marked ‘Underwood’ until 1925 when the company ceased trading. Stephen Mitchell (10 March 1884 – 7 June 1951) was a Scottish Unionist politician who sought change through unity. Educated at Loretto School and Jesus College, Cambridge, he served as a Major with the Fife and Forfar Yeomanry, including service in World War I. He was a Director of Imperial Tobacco. Mitchell was Unionist Member of Parliament (MP) for Lanark from 1924 until 1929. Mitchell also was a Member of the Royal Company of Archers and was High Sheriff of Gloucestershire in 1945-1946. A copy of a contemporary photo portrait of Stephen Mitchell MP is illustrated in image 3. This is an excellent spear point Bowie Knife made by Henry Thomas Underwood With Scabbard Marked to Capt Stephen Mitchell of the Fife & Forfar Yeomanry, no doubt carried by him as a private purchase fighting knife during WW1. The knife and scabbard are similar to those described and illustrated on pages 182 & 184 of ‘The London Knife Book 1820-1945’ by Flook). It has a clean, sharp, 8” long polished steel spear point blade with medial ridge. The knife measures 13 ¼” overall. One side of the blade is marked with partially visible ‘Crown VR’ (Victoria Regina) above maker detail ‘Underwood 56 Haymarket London’. It has a German Silver, ferrule & cross guard holed for scabbard retaining clip and attractive, undamaged, curved Stag horn handle with German Silver pommel cap. The Bowie has its original brown leather scabbard. The rear of the scabbard has a stitched seam and single belt loop. The throat has a steel scabbard retaining clip which works as it should and keeps the Bowie securely in its scabbard. All stitching & leather of the scabbard are intact. The body of the scabbard has period ink handwriting ‘Captain Stephen Mitchell, Fife & Forfar Yeomanry’. The price includes UK delivery. ED 2424 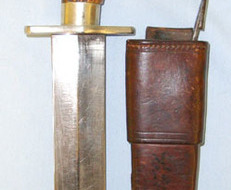