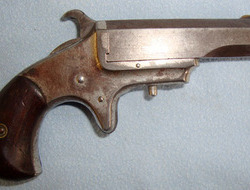 
Hopkins & Allen Arms Company was a U.S. firearms manufacturing company based in Norwich, Connecticut that was founded in 1868 by Charles W. Allen, Charles A. Converse, Horace Briggs, Samuel S. Hopkins and Charles W. Hopkins. The Hopkins brothers ran the day-to-day operations of the company until it went bankrupt in 1916 and was subsequently bought by Marlin-Rockwell. Known as the ‘XL’ range of pistols, these derringers & revolvers were one of many revolvers based on S&W and Colt Patents produced in the 1860’s through to the late 1870s with dynamic or quirky names to attract sales. This is an original .41 Cal Rim Fire ‘XL’ derringer of the type made by Hopkins and Allen similar in design to Colt’s patent derringers. Our ‘XL’ derringer has a nickel plated steel frame with a sheathed trigger. Most of its original nickel plating is present. Its 2 ½” steel barrel pivots for loading which is achieved by depression of a steel button under the frame when the pistol is at half cock. The barrel pivots as it should and is tight. Its rifled bore has staining and residue consistent with age and use. The top of the barrel is signed ‘XL Derringer’ and one of the barrel flats is marked ‘Pat Apr 5 1870’. It has its original American Rosewood grips which are in very good condition and secured with a single recessed brass screw bolt. Its loading and firing actions work perfectly. There are no other external visible numbers or manufacturer’s marks on this piece. NB As an obsolete calibre rim fire derringer no licence is required to own this item in the UK if retained as a part of a collection or display, the price includes UK delivery. Sn 14246
£545.00 ...Read full description
CategoryPistol / Hand Guns
SubcategoryDeringer
ConditionUsed
Price£ 545
Sale typeTrade
MakeHopkins & Allen
Calibre.41 RF
Model1870 Patent .41 Cal Rim Fire Single Shot (Colt) 'XL' Derringer with Pivot Octago
Antiqueyes
CertificateNo Licence
Barrel length2 1/2 inches
Your reference14246
Gun StatusActivated
Recommended UsageCollection item