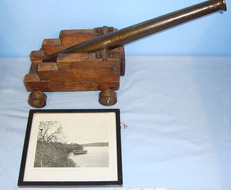 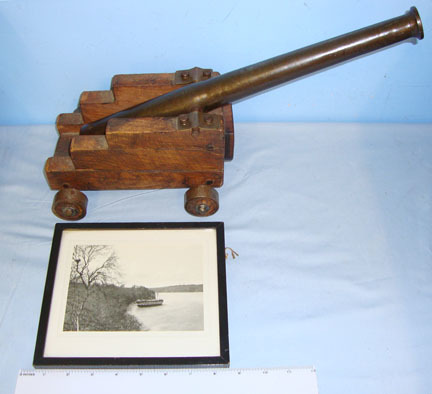 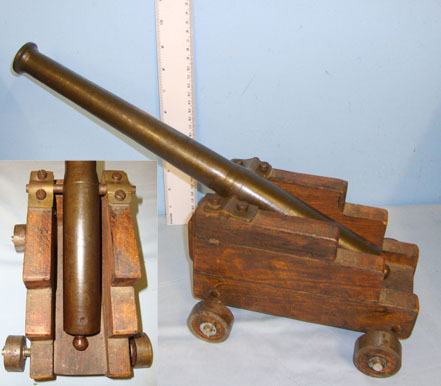 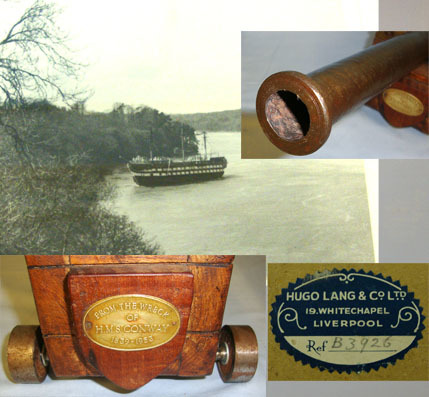 
HMS Conway was a naval training school or "school ship", founded in 1839 and housed for most of her life aboard a 19th-century wooden ship of the line. The ship was originally stationed on the Mersey near Liverpool, then moved to the Menai Strait during World War II. While being towed back to Birkenhead for a refit in 1953, she ran aground and was wrecked, and later burned. The school moved to purpose-built premises on Anglesey where it continued for another twenty years. Famous alumni of the school include : Captain Matthew Webb (at Conway 1860–1862), the first man to swim the English Channel from England to France. Lionel "Buster" Crabb (1922–1924), the Royal Navy frogman who disappeared in mysterious circumstances while on a diving mission near a Soviet warship in 1956 & Ian Fraser (1936–38), awarded the Victoria Cross for commanding a midget submarine attack on the Japanese cruiser Takao in Singapore harbour. This is a Victorian 8 Bore black powder muzzle loading signalling cannon. The cannon barrel is 17” overall length. The barrel has trunnions & pivots for adjustable firing position. The touch hole is open and the smooth bore has staining & residue consistent with age and use. The later carriage with stepped side elevations was made from wood recovered from the wreck of HMS Conway. The front elevation of the carriage has an embossed brass plate with wording ‘From The Wreck Of HMS Conway 1839-1953’. The carriage has solid steel wheels and axles & brass trunnion plates secured by screws. The cannon & carriage are in very good condition. The cannon is accompanied by a glazed framed contemporary black & white photograph of HMS Conway. The rear of the frame has its original paper trade label ‘ Hugo Lang & Co 19 Whitechapel Liverpool Ref B3926. The rear of the frame is mounted with cord for wall hanging. The frame measures 8”x7”x ½”. The price includes UK delivery. N.B. As an antique muzzle loading black powder cannon no licence is required to own this item if retained as a part of a collection or display. Sn 15979
£475.00 ...Read full description
CategoryRifles
SubcategoryMuzzleloader
ConditionUsed
Price£ 475
Sale typeTrade
MakeHugo Lang & Co 19 Whitechapel Liverpool Ref B3926
Model8 Bore Black Powder Muzzle Loading Signalling Cannon With Later Wheeled Carriage
Manufactured YearVictorian era
Antiqueyes
CertificateNo Licence
Overall length17 inches
Your reference15979
Gun StatusActivated
Recommended UsageCollection item

In our community section
More about this: Is Lead Ammunition A Thing Of The Past? Part 1