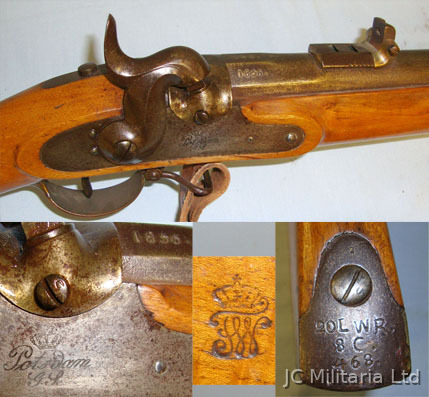 
The Model 1809 Potsdam musket saw service in the Napolenic wars. From 1831 to 1839, Prussia began large-scale conversion from flintlock to percussion circa 1839, becoming the M1809/39, but research indicates conversions may have started as early as 1831. The name "Potsdam" comes from the guns made at the Prussian State Potsdam arsenal. These weapons saw service during the American Civil War and were used by both sides during that conflict. The rifles were made in both smoothbore and rifled variants. A contract for 165,000 smooth bore & rifled Potsdam’s arrived in the USA in 1861/62 for issue to federal forces. Our Model 1809/31 Potsdam rifle is in excellent condition. It has all original wood and metal throughout. It has a 40” barrel which has a clean bore with crisp well defined rifling. The barrel has a blade fore sight and flip up rear sight. It has a bayonet bar, brass barrel bands, trigger guard with extended tang and the shoulder stock with figured cheek piece has a steel butt plate Regiment marked ‘20 LWR 8C 468’. The action plate has the Potsdam arsenal mark. The wood and metal have Imperial German inspection marks and various numbers. The rifle has its original steel cleaning rod with screw off worm. The rifle’s sling swivels are fitted with a later leather sling. The rifle’s cocking and firing actions work as they should. The price includes UK delivery. NB As an antique muzzle loading percussion rifle no licence is required to own this item if retained in a collection or display. Sn 18163:3
£1,375.00...Read full description
CategoryRifles
SubcategoryMuzzleloader
ConditionUsed
Price£ 1,375
Sale typeTrade
MakeImperial German Potsdam Prussian State Arsenal
Calibre.7
ModelM1809/31 .70 Calibre Muzzle Loading Percussion Rifle Regiment marked ‘20 LWR 8C
Manufactured YearAMERICAN CIVIL WAR ERA
Antiqueyes
MechanismPercussion
CertificateNo Licence
Your reference18163:3
Gun StatusActivated
Recommended UsageCollection item

In our community section
More about this: The Britannia Air Rifle