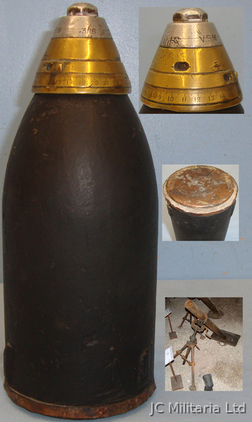 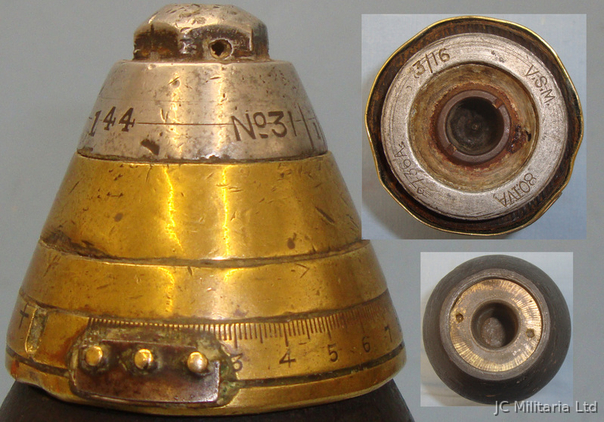 INERT DEACTIVATED. This is a scarce early WW1 British 4 inch light trench mortor originally developed during WW1 and entered service at the end of 1914. The mortor was fashioned from a 6 inch naval projectile, being lightened by boring the shell cavity out to lighten it. The mortor has a copper gas cheque on the bottom and three rectangular studs near the base of the projectile to engage in rifling of the mortor. A rifled muzzle loader (RML) is a type of large artillery piece invented in the mid-19th century. In contrast to smooth bore cannon which preceded it, the rifling of the gun barrel allowed much greater accuracy and penetration as the spin induced to the shell gave it directional stability. The mortor is complete with its rare alloy and brass number 31 Mk 1 nose fuse with an alloy hexagonal nose cap. The fuse was a modified British No 80 time and percussion fuse and the time element was altered at the lower settings by a small steel plate riveted on to the bottom time ring by three brass rivets. The fuse is stamped on its base’3/16’ (March 2016) V.S.M. (Vickers, Son and Maxim) The time ring is graduated from 0 to 22. The price includes UK delivery and no licence is required to possess this inert grenade items in the UK if retained as part of a collection or displays. O 1330