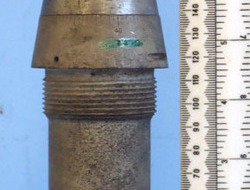 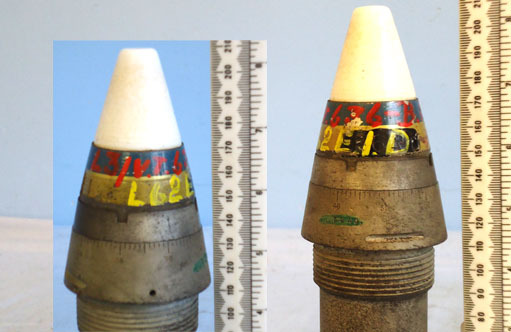 INERT DEACTIVATED British L62E.I.D. nose fuse. This fuse has a 4mm wide painted purple band round the gain part of the fuse, designating the fuse to be of an experimental nature. The steel fuse body has the standard British shell thread and the top of the fuse has a time ring scale from 5 to 82 as well as ‘safe’ engraved on it. Under the time scale is stamped FL 3240 highlighted with green paint. The top of the fuse rotates to set the time. At the very top of the fuse is a white plastic cap reminiscent of a ‘VT’ – Proximity fuse and painted in red under the white cap is L3/ V.T.636-B.14. Under this in yellow paint is painted L62 E.I.D. followed in red painting W/S 52-86 . When the black bakelite transit plug is taken off the bottom of the fuse, there is revealed a clockwork time mechanism which is stamped FL 62 LOT 3240 . Above the purple band on the fuse is etched L3/1508 . The price includes UK delivery and no licence is required to possess this fuse in the UK if retained as part of a collection or display. Sn O 1059

In our community section
More about this: The Gun Register by Promoter - A dedicated dealer ...