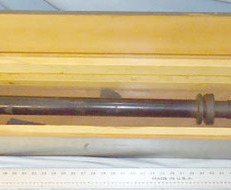 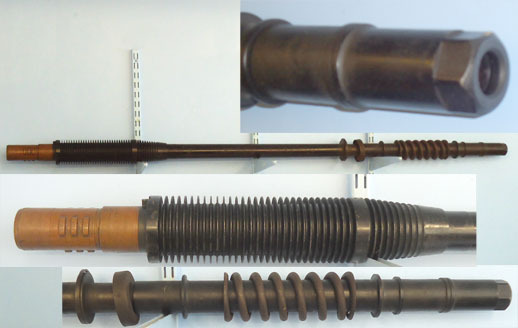 INERT DEACTIVATED. This is museum standard deactivated Hispano-Suiza HS 404 MKII 20mm replacement cannon barrel. The Hispano-Suiza HS 404 MKII cannon first entered service in 1941 and was fitted to a variety of British aircraft including the Supermarine Spitfire, Hawker Hurricane, Westland Whirlwind and Bristol Beaufighter and Hawker Typhoon. The gun became an upgrade for the standard armament of Browning .303 machine guns. This is an original Hispano-Suiza HS 404 MKII 20mm replacement cannon barrel which retains most of its original black finish in its fitted original olive green wooden transit case with rope handles at each of the box. The barrel is an impressive 68 inches long. The wooden transit case is 79 inches long. There is a worn printed label on the box lid with ‘acture and Research Co Ltd GRAN’ which is British Manufacture and Research Co Ltd at Grantham, their WW2 address and were better known as BMARC. BMARC also developed the HS804 30mm cannon experimentally during WW2, this being a larger calibre than the 20mm HS 404 but it was not adopted. No licence is required to possess this inert cannon barrel in the UK if retained as part of a collection or displays. Delivery is by arrangement and at cost. O 1245