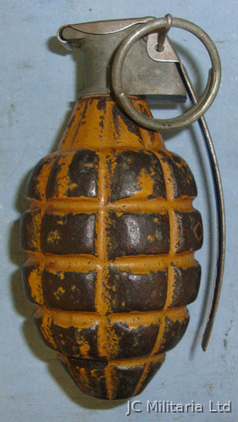 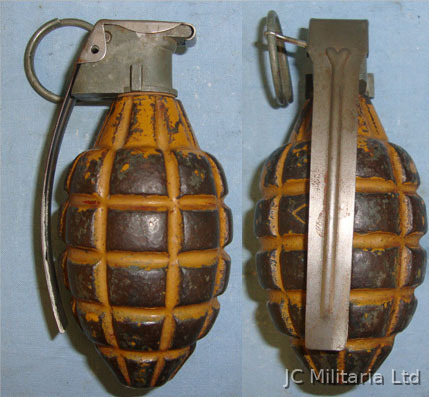 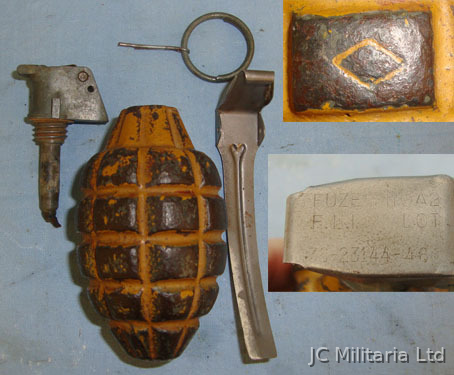 
**INERT**DEACTIVATED**The Mk II / MK 2 grenade is a fragmentation type anti-personnel hand grenade introduced by the U.S. armed forces in 1918. It was the standard issue anti-personnel grenade used during WW2 and in later conflicts, including the Vietnam War. Pre & early WW2 grenades were painted yellow to indicate HE filling, this proved dangerous as enemy snipers could spot the yellow colouring against American Soldier’s green uniforms or in the hand as they were being thrown. This is an original, inert, deactivated, early WW2 American Mk II / MK 2 Pineapple hand grenade. This example has the correct segmented cast iron body & much of its original early yellow paint. The hollow casing has a cast diamond cartouche. It has its original fuse cap lever which is stamped ‘FUSE M10A2 FLI LOT 36-23144-46’. It also has its original pull ring with pin. The lever assembly with fuse and sprung firing cap can be unscrewed to reveal the hollow grenade casing. The price includes UK delivery. Sn 18210:12
£345.00...Read full description
CategoryAccessories
SubcategoryAmmunition
ConditionUsed
Price£ 345
Sale typeTrade
Manufactured YearPre & Early WW2
Your reference18210:12