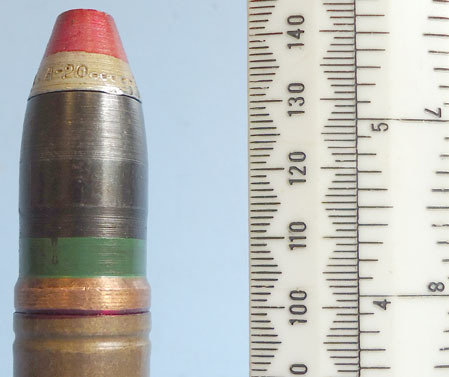 
INERT DEACTIVATED. This is a Soviet 20mm (20x99R) ShVAK TYPE OZ HEI (High Explosive Incendiary) aircraft cannon round. The gun was developed in 1935 and was the main Soviet heavy aircraft gun throughout WW2 and was used in various aircraft including the Yak-1, Yakovlev Yak-3, Yakovlev Yak-7B, LaGG-3, Lavochkin La-5 and La-7, the Petlyakov Pe-3 , Pe-3 and the Ilyushin Il-2. It was also used in theT-60 and T-38 armoured vehicles. This round has a drawn brass cartridge case which is headstamped 513 51 . The steel projectile has a copper driving band and an alloy A20 nose fuse which is stamped 12S1r A 20…..S77 . The projectile retains all of its original black anti-rust paint with the top half of its nose fuse painted rid and a green band above the copper driving band. No licence is required to retain this inert round in the UK if retained as part of a collection or display. Price includes UK delivery. O 1254
£245.00 Read more