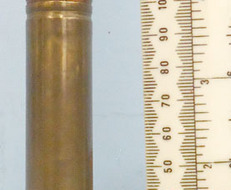 INERT DEACTIVATED. This is a Soviet 20mm (20x99R) ShVAK TYPE BZ (API-HC Armour Piercing Incendiary- Hardened Steel Core) aircraft cannon round. The gun was developed in 1935 and was the main Soviet heavy aircraft gun throughout WW2 and was used in various aircraft including the Yak-1, Yakovlev Yak-3, Yakovlev Yak-7B, LaGG-3, Lavochkin La-5 and La-7, the Petlyakov Pe-3 , Pe-3 and the Ilyushin Il-2. It was also used in theT-60 and T-38 armoured vehicles. This type of prrojectile was used during the Russian tank battles, especially at Kursk to defeat the lightly top armour of German tanks. This round has a drawn brass cartridge case which is headstamped ORH - Click here to reveal phone number - ate). The steel projectile has a copper driving band has a steel core with a threaded alloy nose cap which held the incendiary mixture. The projectile is stamped 3 stamped above the driving band. No licence is required to retain this inert round in the UK if retained as part of a collection or display. Price includes UK delivery. Sn. O 1253

In our community section
More about this: Introducing Ben Marks-Thomson