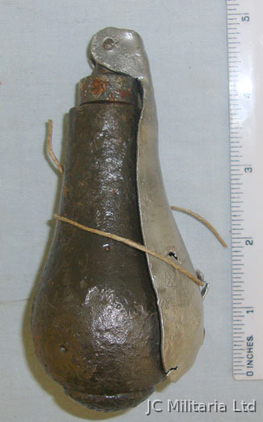 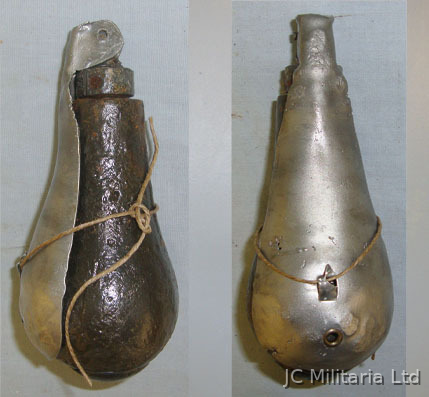 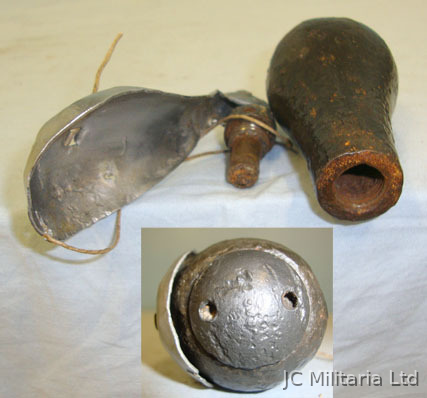 
**INERT**DEACTIVATED** There were several projects during World War 1 (1914-1918) designed around the development of an impact-based hand grenade. Hand grenades grew in considerable value for world powers of the period, particularly since the war had bogged down into Trench Warfare before the end of 1914. The Germans found some success in the field with their "Turtle" grenade and the French attempted to respond in turn with the "Pear" - formally known as the "Grenade Percutante Nr.1", also known as the "P1". When the war opened, the French had to rely on several foreign grenade types so the P1 represented a shift to a home grown product. Construction of the new grenade involved an iron body, smooth on the outside and grooved on the inside for maximum fragmentation. A lead plug was inserted at the base with the igniter set over the top of the grenade. A metal "spoon" was set along the side of the grenade and formed part of the operation process. A thin wire acted as a safety device that had to be severed prior to operation and the spoon-shaped lever turned up. Once thrown and landed (hopefully on its base) a percussion pin moved against the detonator to complete the desired result. In theory, this left little to no time for the enemy to pick up and throw the grenade back in the direction of the attacker. The P1 grenade became available to French troops in May of 1915 and quickly became recognized by its shape as the "Pear" or "Spoon" grenade. Accidental detonations were common and landing the grenade vertically was not always possible - if impossible under the pressures of the battlefield. As such this grenade design was viewed largely as unreliable but still saw considerable production figures for lack of anything better. Our inert, deactivated, original example is in very good condition. The hollow iron pear shaped casing has even patina and correct lead base plug. It’s alloy spoon shaped lever assembly unscrews from the casing. The original lever is secured to the casing by later cord which replaces the original wire which would have been present and is most always missing. The price for this rare, WW1 French hand grenade includes UK delivery. Sn 18210:26
£245.00...Read full description
CategoryAccessories
SubcategoryAmmunition
ConditionUsed
Price£ 245
Sale typeTrade
Manufactured YearWW1
Your reference18210:26