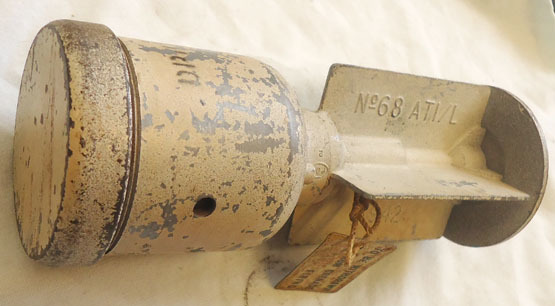 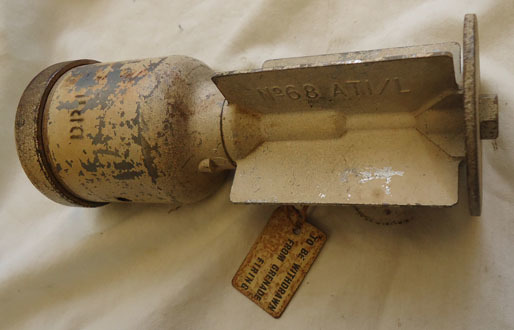 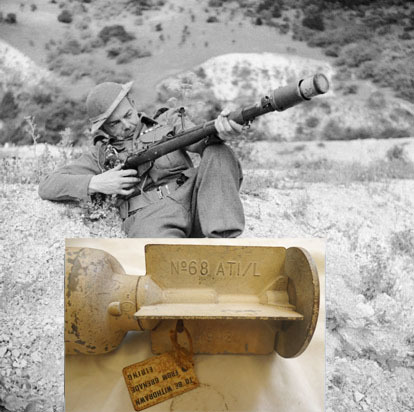 
INERT DEACTIVATED. The Grenade, Rifle No. 68 /AT was a British anti-tank rifle grenade used during WW2.The No. 68 was an early form of shaped charge grenade, and has some claim to have been the first High Explosive, Anti-Tank (HEAT) device in use. The design of the warhead was simple and was capable of penetrating 52mm (2 inches) of armour in 1940. The fuse of the grenade was armed by removing a pin in the tail which prevented the firing pin from flying forward. The grenade was launched from a rifle cup. The four fins gave it some stability in the air and, provided the grenade hit the target at the proper angle (90 degrees), the charge would be effective. Detonation occurred on impact, when a striker in the tail of the grenade overcame the resistance of a creep spring and was thrown forward into a stab detonator. This is an original, inert, British WW2 service pattern DRILL No. 68 MK IIII AT grenade. One of the fins is crisply cast with No-68 ATI/L and 1942 is on another fin. There is also has a small ‘pdc’ mark in an oval near the base of one of the fins (A and F Pears Limited, Die Casting Co, Peterborough). The projectile retains most of its original light grey paint . Its body is hollow and its screw off cap will have a black rubber weighted insert in it which can be seen through 2 x ¼” holes drilled diagonally in the body. Its integral fins are secure and straight. A bolt is used to secure the circular gas check to the base of the projectile. A steel safety pin plate is attached to the grenade split pin by a piece of white string an on it is written TO BE WITHDRAWN FROM GRENADE BEFORE FIRING . Inset in image 2 a contemporary photograph shows a member of the Home Guard with a rifle equipped to fire an anti-tank grenade at Dorking, 3 August 1942. Price includes UK delivery and no licence is required to possess this inert grenade in the UK if retained as part of a collection or display. O 1564
£275.00Read more
CategoryAccessories
SubcategoryAmmunition
ConditionUsed
Price£ 275
Sale typeTrade
Manufactured Year1942
Read more
Your referenceO 1564

More about this
How does Coronavirus impact the UK’s shooting disciplines?