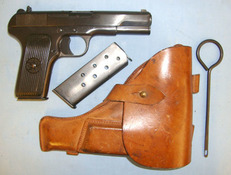 
****This Firearm is deactivated to one of the pre- 2nd May 2017, UK specifications. As such it can only be sold and exported in its present state to customers in NON- EU countries including the Isle of Man and Channel Islands. Customers based in the UK & other EU countries can purchase on our lay-away scheme. The weapon will then be brought up to the EU specification and the relevant certificate obtained prior to the transfer of ownership and delivery. ****The TT-33 7.62 mm Tokarev self-loading pistol is a Russian semi-automatic pistol developed in the early 1930s by Fedor Tokarev as a service pistol for the Soviet military to replace the Nagant M1895 revolver that had been in use since Tsarist times. The pistols were issued to Russian Officers and were used throughout WW2 and the Cold War. This is an excellent original Cold War dated example complete with 2 magazines which both have lanyard rings fixed to the butt. The Magazines are numbered ‘HC2933’ and ‘3N31’. The pistol has its original blue finish. The left side of the frame is stamped with Russian Izhevsk Arsenal inspection mark and number 'HC1206'. It is also crisply date stamped '1951'. The serial number is repeated on top of the slide. Its black Bakelite ribbed grips are undamaged & have nice Soviet 'CCCP' marked roundels with stars. The butt has a fixed lanyard ring. The pistol has fixed combat fore & rear sights. Deactivated to Early UK specification in 1996 the pistol cocks and dry fires. It is complete with its original brown leather holster. The holster is in excellent condition with full flap cover, single brass stud fastener, spare magazine pocket and 2 rear belt loops. The right aspect of the holster has 2 small stitched leather fittings for cleaning rod. The original steel cleaning rod is present. The price includes deactivation certificate & UK delivery. Sn 11435
£695.00...Read full description
CategoryPistol / Hand Guns
SubcategorySemi Auto
ConditionUsed
Price£ 695
Sale typeTrade
MakeIzhevsk Arsenal
Calibre7.62 mm
ModelTokarev TT-33 7.62mm Semi Automatic Pistol With 2 Magazines & Holster With Clean
Manufactured YearCold War 1951
Your reference11435
Gun StatusDeactivated