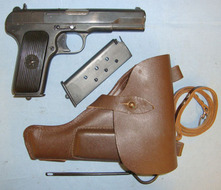 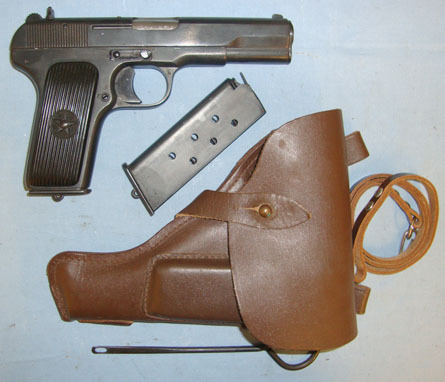 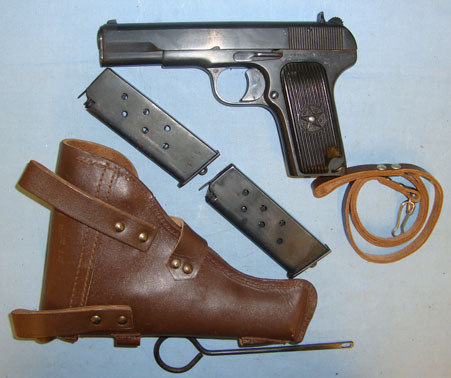 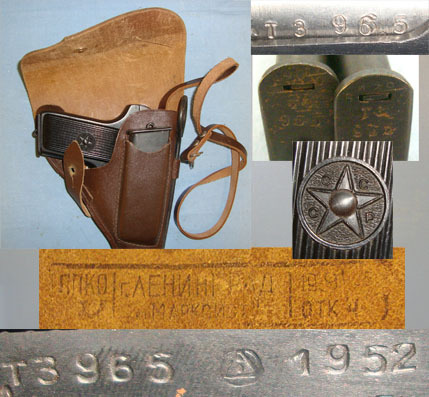 
The TT-33 7.62 mm Tokarev self-loading pistol is a Russian semi-automatic pistol developed in the early 1930s by Fedor Tokarev as a service pistol for the Soviet military to replace the Nagant M1895 revolver that had been in use since Tsarist times. The pistols were issued to Russian Officers and were used throughout WW2 and the Cold War. This is an excellent original Cold War dated example complete with 2 magazines which both have lanyard rings fixed to the butt. The pistol has its original blue finish. One side of the frame is stamped with Russian inspection marks and number 'T3965'. It is also crisply date stamped '1952' and has the post 1928 Izhevsk arsenal mark of a ‘circle containing a triangle and arrow’ (In Russia Izhevsk the capital city of Udmurtia, has the titles of the Armoury Capital of Russia and the City of Labour Glory). The breech has matching number. Its ribbed Bakelite grips with ‘Star CCCP’ roundels are undamaged. The butt has a fixed lanyard ring. This set has a leather lanyard with loop end and sprung clasp fastener which attaches neatly to the lanyard ring. The pistol has open combat sights. Both of its original magazines have matching numbers ‘T3965’ and other struck out numbers (illustrated). It is complete with its brown leather holster. The holster is in excellent condition with full flap cover, single brass stud fastener, spare magazine pocket and rear riveted belt loops. The right aspect of the holster has 2 small stitched leather fittings for steel cleaning rod which is present. The inside of the flap has a Soviet ink stamp. Deactivated to UK/EU specification in 2020 the pistol’s slide and trigger move. The price includes UK/EU deactivation certificate & UK delivery. Sn 17865:15
£675.00...Read full description
CategoryPistol / Hand Guns
SubcategorySemi Auto
ConditionUsed
Price£ 675
Sale typeTrade
MakeIzhevsk Arsenal
Calibre7.62 mm
ModelTokarev TT-33 7.62mm Semi Automatic Pistol With 2 Magazines, Leather Lanyard & C
Manufactured YearCold War 1952
MechanismDeactivated
CertificateNo Licence
Your reference17865:15
Gun StatusDeactivated