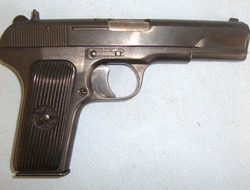 
The TT-33 7.62 mm Tokarev self-loading pistol is a Russian semi-automatic pistol developed in the early 1930s by Fedor Tokarev as a service pistol for the Soviet military to replace the Nagant M1895 revolver that had been in use since Tsarist times. The pistols were issued to Russian Officers and were used throughout WW2, the Korean War and the Cold War era. This a very good original example The pistol has its original blue finish & it strips cocks & dry fires. The left side of the frame is stamped ‘1952’ (date) together with numbers nc1631 and triangle with arrow Russian Izhevsk arsenal mark. Its black Bakelite ribbed grips are undamaged & have 5 pointed star ‘CCCP’ embossed roundels. The butt has a fixed lanyard ring. The pistol has fixed fore & rear sights and military ring hammer. Its original magazine is stamped with matching number ‘nc1631’ together with a separate struck out number. Price includes deactivation certificate & UK delivery. Sn 13691
£475.00...Read full description
CategoryPistol / Hand Guns
SubcategorySemi Auto
ConditionUsed
Price£ 475
Sale typeTrade
MakeIzhevsk arsenal
Calibre7.62 mm
ModelTT-33 7.62mm Semi Automatic Pistol.
Manufactured Year1952
CertificateNo Licence
Your reference13691
Gun StatusDeactivated
Recommended UsageCollection item