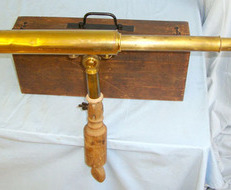 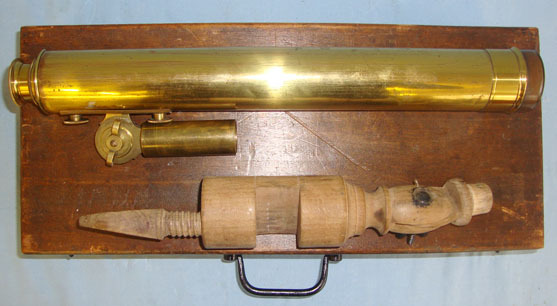 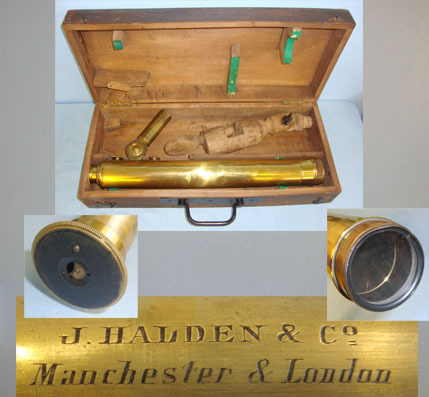 
J. Halden & Co. Ltd were producers of a range of drawing and surveying instruments and other office materials and had offices at 8 Albert Square, Manchester, London, Newcastle-upon-Tyne, Birmingham, Glasgow, Leeds, with their manufacturing base at Rowsley Works in Reddish, Stockport. The business was started by Joseph Halden in partnership with A.G. Thornton in 1878 as a wholesale drawing material importer and mounting paper manufacturer. However, by the 1880s, A.G. Thornton had left the business and moved to his own premises which were based on Deansgate. The company continued producing optical instruments through both World wars and into the 1960’s. The companywas finally taken over in 1969 by the Ozalid Group, which was started as part of the German company Kalle in 1928. This is a very good cased table telescope by J.Halden & Co made in the early 20th Century with original period wood Table clamp / stand. The optics of the telescope are excellent and clear. When mounted in its extended position it is 28 ¾” in length. The brass telescope has a copper sun shade and sliding protective cover on the eyepiece. The scope is crisply engraved near to the eye piece ‘J.Halden & Co Manchester & London’. The stand has a turn screw fitting which attaches securely to the edge of a table or desk. The top of the clamp has a steel wing nut and screw which can be tightened as desired to direct the telescope vertically. The top of the wood clamp fits snugly into the brass mounting bracket of the telescope. When attached to the clamp the telescope rotates freely 360 degrees. When not in use the telescope and stand fits into it’s wooden case with hinged lid fixed carry handle and hook fasteners. The price includes UK delivery. Sn 14978
£275.00Read more
CategoryAccessories
SubcategorySights & Optics
ConditionUsed
Price£ 275
Sale typeTrade
Manufactured YearEarly 20th Century
Read more
Your reference14978
Recommended UsageCollection item