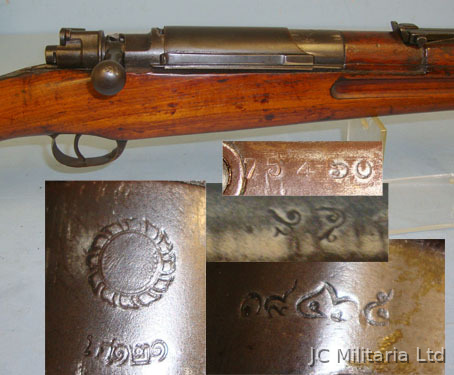 
***This Firearm is deactivated to one of the pre- 2nd May 2017, UK specifications. As such it can only be sold and exported in its present state to customers in NON- EU countries including the Isle of Man and Channel Islands. Customers based in the UK & other EU countries can purchase on our lay-away scheme. The weapon will then be brought up to the EU specification and the relevant certificate obtained prior to the transfer of ownership and delivery. ***Facing the threat of Western colonial expansionism in Southeast Asia during the later part of the 19th century, King Rama V of Siam (now Thailand), sought new weapons as part of a modernization program to ensure the kingdom's independence. After experiments with other rifles, the Siamese military decided to purchase a Mauser rifle based on the Gewehr 98 design as their principle service rifle and designated it the Type 46 rifle. Through various modifications, adaptations, and using various cartridges, the Siamese Mausers served as the main infantry weapon of Siam until after World War II. Some features and characteristics of the Japanese Type 35 rifle (under development in the same arsenal at that time) were also incorporated, such as the sliding dust cover. Type 47 carbines were also made on the same design lines and in 1923 Type 46/66 rifles and carbines were introduced. This is an original Siamese Type 46 rifle. It has all original woodwork and metal and has forward and rear sling swivels. It has a steel butt plate, cleaning rod, block & blade fore sight and adjustable rear sight & sliding dust cover. The metal work has Siamese crest and script characters which we believe translate to ‘1903’ date as found on other examples of this model of rifle. The rifle is serial number 754. Deactivated to UK specification in 2002 the rifle cocks and dry fires crisply. The price includes deactivation certificate & UK delivery. Sn 18196:22
£695.00...Read full description
CategoryRifles
SubcategoryBolt Action
ConditionUsed
Price£ 695
Sale typeTrade
MakeJapanese Mauser
Calibre8 mm
ModelSiamese Contract Type 46 (German Mauser G98) 8 x 50mm Calibre Bolt Action Infant
Manufactured Year1903
MechanismDeactivated
CertificateNo Licence
Your reference18196:22
Gun StatusDeactivated
Recommended UsageCollection item

In our community section
More about this: What are PCP Air Rifles? Surplus Store UK