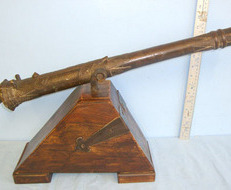 
Lantaka were a type of bronze cannon mounted on merchant vessels travelling the waterways of Malay Archipelago in the 1800’s. Their use was greatest in precolonial South East Asia especially in Malaysia, the Philippines, and Indonesia. The guns were used to defend against pirates. Many of these beautiful guns were mounted on swivels and were known as swivel guns. Small examples could be mounted in rigging and be fired hand held by Ship’s crew. This is an original 19th Century Cast bronze Lantaka Swivel Cannon. It is 26” in length . It has a 1” bore at the muzzle opening. It has a 5 ¾” long blackened iron mounting shaft with curved arms secured to the barrel by lugs either side of the barrel. The shaft is intact and has no damage. The cannon barrel has a flared ornate muzzle. The barrel has fixed sights which are incorporated into the cast design which features stylised foliate motifs and birds within panels designs. Its aiming handle is hollow for adding an additional wood handle to assist aiming. The barrel is open and it has its original open touch hole. The Lantaka is complete with a later wood display stand which is 13” x 8 ½” x 7 ¾”. The stand is mounted with 2 decorative iron plates. The top of the stand is holed and fits the cannon’s spike snugly and allows the barrel to swivel freely. The Lantaka itself weighs 5.95 Kg. The stand weighs 3.11 Kg. The price for this historic Lantaka with stand which would make a superb display / conversation piece includes UK delivery. N.B. As an antique black powder cannon no licence is required to own this item in the UK if retained as part of a collection or display. Sn 15227
£995.00 ...Read full description
CategoryRifles
SubcategoryMuzzleloader
ConditionUsed
Price£ 995
Sale typeTrade
MakeLantaka Merchant Ship Defence Deck / Rigging Cannon With Wooden Display Stand
Calibre1 Inch
ModelOriental Cast Bronze Lantaka Merchant Ship Defence Deck / Rigging Cannon With Wo
Manufactured Year19th Century
Antiqueyes
CertificateNo Licence
Barrel length26 inches
Your reference15227
Gun StatusActivated
Recommended UsageCollection item

In our community section
More about this: Britain’s Best Shooting Grounds: Marylebone Rifl...