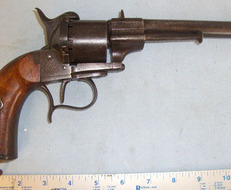 
This is an excellent original 12mm calibre , 6 shot French Lefaucheux Model 1854 cavalry revolver. Used by French & Belgian forces it is interesting to note that at the outbreak of the American civil war in 1861, both the Federal and Confederate Governments looked to Europe to supplement insufficient arms inventories, and approximately 14,000 large frame model 1854 Lefaucheux revolvers were purchased. Of these, 12,000 found their way into Union service and were often used by Union officers. The LeFaucheux was one of the only foreign-manufactured revolvers to have been imported by the U.S. Government during the Civil War. They were often referred to as the "French Tranter". Our example is 11 ¾” overall with a 6 ¼” round steel barrel stepped to octagonal at the breech. The bore is clean with crisp rifling. The pistol has its original blue finish. It has an excellent undamaged, walnut grip. It is side gate loading & is double action. It has its original captive ejector rod. The cocking and firing actions function as they should in both single and double action. It has a blade fore sight and ‘v’ notch plate rear sight. The frame is marked with ‘Lefaucheux’ detail and numbered ‘13651’. The cylinder has Liege ELG and other proof marks (all illustrated). This is an excellent example of a Lefaucheux pin fire revolver & the price includes UK delivery. NB As an obsolete calibre pin fire weapon, no licence is required to own this item in the UK if retained as a part of a collection or display. Sn 15124
£895.00 ...Read full description
CategoryPistol / Hand Guns
SubcategoryRevolver
ConditionUsed
Price£ 895
Sale typeTrade
MakeLefaucheux Patent
Calibre12 mm
ModelModel 1854 Cavalry 12 mm Pin Fire Obsolete Calibre Double Action Revolver With L
Antiqueyes
CertificateNo Licence
Barrel length6 1/4 inches
Overall length11 3/4 inches
Your reference15124
Gun StatusActivated
Recommended UsageCollection item