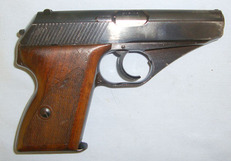 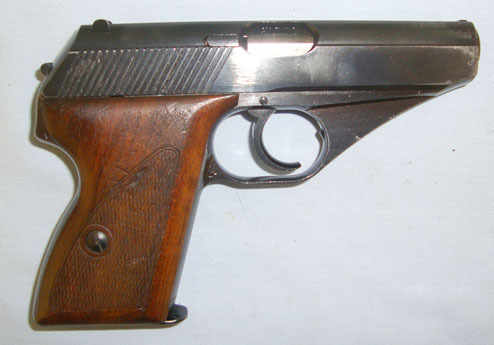 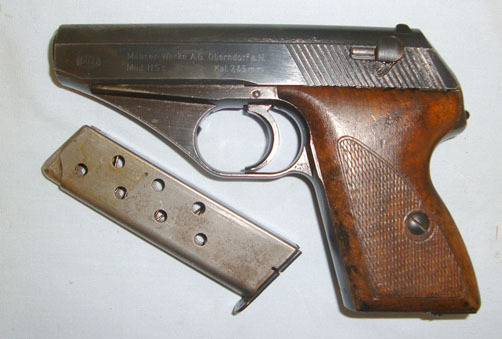 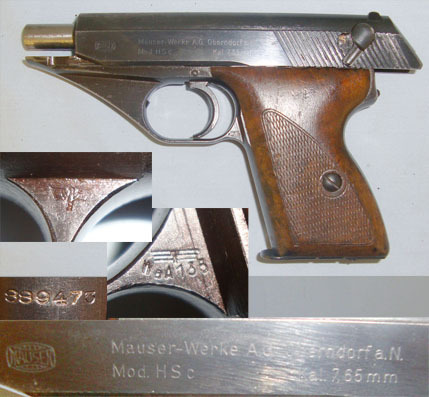 
**This Firearm is deactivated to one of the pre- 2nd May 2017, UK specifications. As such it can only be sold and exported in its present state to customers in NON- EU countries including the Isle of Man and Channel Islands. Customers based in the UK & other EU countries can purchase on our lay-away scheme. The weapon will then be brought up to the EU specification and the relevant certificate obtained prior to the transfer of ownership and delivery** The Mauser HSc is a 7.65mm pistol made in Nazi Germany during World War II at Mauser's Oberndorf factory (see pages 35 to 40 of Axis pistols by Still). The designation HSc stood for Hahn Selbstspanner ("self-cocking hammer") Pistole, third and final design "C". The German Army began HSc procurement with an initial order in early 1941 & production ended with the capture of the Oberndorf area by Allied troops in late April 1945. After the area was given to the French production resumed for French use and was concluded in 1946. This is an excellent rare to find Nazi made HSc Pistol. It's metal work and wood grips are in great condition. The left side of the slide is crisply marked with the correct 'Mauser-Werke A.G Oberndorf a. N' factory designation together with Mauser cartouche and 'Mod. HSc' & 'Kal.7.65mm' Calibre detail. The grip strap is stamped with serial number '880473'. The pistol’s trigger guard is Waffenamt, The reverse has Eagle inspection mark. Deactivated to UK specification in 2011, the pistol cocks and dry fires as it should and its magazine can be removed. There are no marks on the magazine. The price for this sought after Nazi marked pistol includes deactivation certificate and UK delivery. Sn 18048:23
£1,200.00...Read full description
CategoryPistol / Hand Guns
SubcategorySemi Auto
ConditionUsed
Price£ 1,200
Sale typeTrade
MakeMauser-Werke A.G Oberndorf a. N\' factory designation
Calibre7.65 mm
ModelHSc 7.65mm Semi Automatic Pistol
Manufactured YearGerman Nazi Era
MechanismDeactivated
CertificateNo Licence
Your reference18048:23
Gun StatusDeactivated
Recommended UsageCollection item