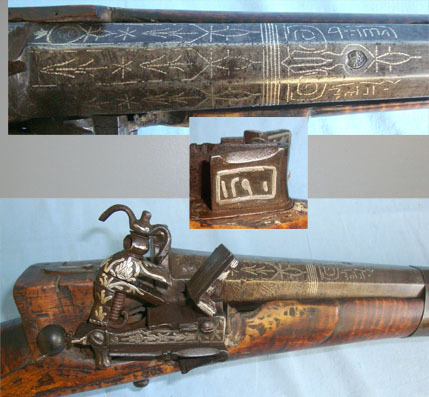 
Miquelet lock is a modern term used by collectors and curators, largely in the English-speaking world, for a type of firing mechanism used in muskets and pistols. It is a distinctive form of snaplock, originally as a flint-against-steel ignition form, once prevalent in Spain, Portugal, Italy, the Balkans, North Africa, the Ottoman Empire and throughout Spain's colonies from the late 16th to the mid 19th Centuries. The miquelet may have come to the attention of arms makers in Istanbul & North Africa via long-established trade routes from Italian city-states through the port of Ragusa (Dubrovnik) to provinces on the Balkan Peninsula. Other avenues were probably provided by booty from corsair raids and/or from the many Ottoman-Euro conflicts of the period. The muzzle loading weapons were generally handmade weapons, and consequently they widely varied in their construction. They were seen as very personal weapons, and unlike the typical military weapons of the time which were very plain and utilitarian, the weapons tended to be well crafted and were usually intricately decorated. The stocks were handmade and ornately decorated. This is a 19th century miquelet lock musket in the form found in the Ottoman Empire in that era. It measures 48” overall length. It has an octagonal 34" long steel barrel which is 14.93 mm muzzle diameter (approx. 24 Bore). The barrel has a small silver blade fore sight and grooved block rear sight. The bore has staining consistent with age and crisp well defined rifling. The barrel flats and underside of the action have detailed silvered Arabic signatures most likely gunsmith and or family names. It has steel barrel bands. The hammer and action have ornate silvered decoration. The weapon has its original steel ram rod. Its original Olive or Palm wood stock has an attractive Tiger stripe hue and bone or Ivory inlays. It has a steel ball end trigger on the underside of the stock. The butt is mounted with decorative metal plates. The wood and metal have the wear and patina to be expected of a native weapon of its age. The rifle cocks and dry fires but due to age and condition it is advised that this action is not performed to avoid damage to the action. The price includes UK delivery. NB As an antique miquelet musket no licence is required to own this item in the UK if retained as part of a collection or display. Sn 15226
£875.00 Read more

More about this
What type of air gun should a beginner buy?