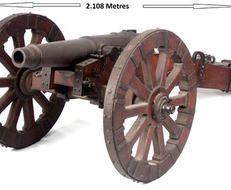 
The Peninsular War (1807–1814) was a military conflict between Napoleon's Empire (as well as the allied powers of the Spanish Empire), the United Kingdom of Great Britain and Ireland and the Kingdom of Portugal, for control of the Iberian Peninsula during the Napoleonic Wars. The war began when the French and Spanish armies invaded and occupied Portugal in 1807, and escalated in 1808 when France turned on Spain, previously its ally. The war on the Peninsula lasted until the Sixth Coalition defeated Napoleon and is regarded as one of the first wars of National liberation. During the Peninsular war Britain supplied its ally Portugal with arms including artillery pieces to assist the war effort. This original Georgian 1 ½ pounder field cannon was found in the early 1980’s on its Portuguese form wheeled carriage indicating that this cannon was one of those supplied to Portugal by Britain during the Peninsular war. These Cannon were often pulled / transported by Mules to and around the battle field. Although the cannon itself and all of the carriage’s original metal work was found to be in excellent condition for its age the woodwork had to a great extent perished. To the credit of the finder, they understood the historical significance of this artillery piece and consulted with English Heritage who supplied detailed plans of period artillery carriage construction & with their advice and supervision made an exact reproduction of the woodwork in Oak. The carriage is mounted with a brass plate inscribed ‘carriage made by A.C Cruse Ipplepen Devon April 1982’. All of the original iron fittings including many iron pyramid studs, bolts, nuts, wheel rims, elevation adjustment wheel, trunnion brackets, rope drag hooks, handling bars, strengthening frames, assembly pins and chains were then painstakingly re-fitted to the carriage to bring this superb artillery piece back to life. The cast iron cannon barrel itself measures 100cm length, the touch hole is open and the smooth bore clean. The top of the barrel has the George III crown as depicted on coins of the era and calibre detail ‘1 ½’ (Pounder). There are no visible proof marks on the cannon. The cannon has even patina, no rust and correct trunnions. The cannon sits securely on the carriage and is held in place by the correct removable iron trunnion plates with 4 chains and pins on the carriage which allows the barrel to be easily removed for inspection or transport. All metal work of the carriage has even patina and no rust. The Oak, spoked wheels with iron pyramid studded rims and iron supports are secured by the correct chains and pins, allowing the wheels to be easily removed for inspection or transport. The cannon including the carriage measures 2.1082 Metres overall length, 96.5 cms width from axle hub to axle hub and 73.5 cms height (diameter of wheels). This is a substantial, extremely rare, historic artillery piece and delivery will be by arrangement and at cost. Sn 15398
£9,750.00 ...Read full description
CategoryRifles
SubcategoryMuzzleloader
ConditionUsed
Price£ 9,750
Sale typeTrade
MakeNAPOLEONIC BRITISH PENINSULAR WAR ERA, 1 ½ Pounder Cannon On English Heritage Su
Model1 ½ Pounder Cannon On English Heritage Supervised Professionally Restored Penins
Manufactured YearNAPOLEONIC BRITISH PENINSULAR WAR ERA,
Antiqueyes
CertificateNo Licence
Barrel length40 inches
Your reference15398
Gun StatusActivated
Recommended UsageCollection item

In our community section
More about this: 10 Things to do With Your Lockdown Time.