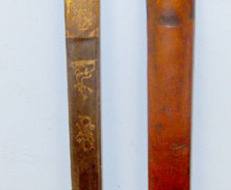 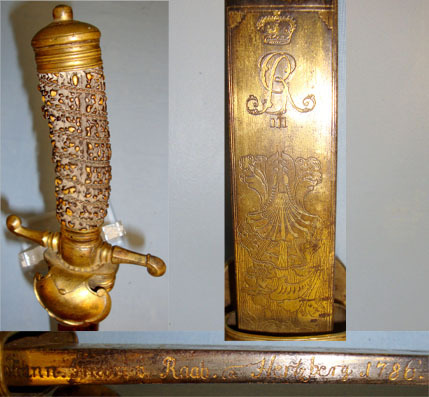 This is a rare, quality made Georgian Clamshell Hunting Dagger / Sidearm. These substantial weapons were carried when hunting large game such as Stag or Boar for self defence and to deliver the 'death blow' to the hunted prey. This dagger has a heavy Stag Antler hilt with heavy brass fittings including cross guard, large clamshell, ferrule and butt cap with finial. The blade is 1 ¼” broad at its widest and is 22” length. The dagger measures 28” overall length. The blade has beautiful etched, blued and gilt panels on both sides and the back of the blade featuring , Stags in the field, horns, Antlers and foliate designs together with British heraldic arms and Crown above Royal Cypher ‘Crown GR III’ ( George II Rex). The back of the blade is signed ‘Johann Friedrick Roab Hertberg’ and dated ‘1786’. The weapon is complete with its original brown leather scabbard with brass chape and throat mount with locket. The throat mount is slotted for small skinning knife which is absent. The leather & stitching of the scabbard are clean, undamaged & intact. The price for this quality Nobleman’s hunting sidearm worthy of further research includes UK delivery. Sn 14659