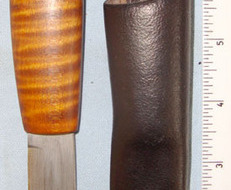 Helle Fabrikker was established in the early 1930's in response to hard times and the depression. The unemployed brothers Steinar and Sigmund Helle started making farming tools and other implements in the forge of their father's farm. In 1932 they started making small sheath-knives which quickly became popular locally. Thus, the foundations of an important business in a typically Western-Norwegian rural area were laid. The Company continues to make quality hunting and utility knives in the modern era. Although there are no visible manufacturer marks on this piece, the knife is in the form of knives made by Heller and is most likely by them. This utilty knife / skinner and scabbard are in near mint condition. It is 7 ¼” overall with a razor sharp 3 ½” steel drop point blade. The knife has a solid Norwegian curly birch handle with distinctive ‘Tiger stripe ‘ pattern. The skinner comes with its original near mint condition hand made, open top, brown leather scabbard which has a stitched rear seam and integral belt loop. The price includes UK delivery. Sn 14584:4
£175.00 ...Read full description
CategoryBlades
SubcategoryHunting Knives
ConditionUsed
Price£ 175
Sale typeTrade
Your reference14584:4
Recommended UsageCollection item