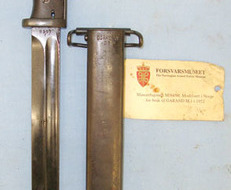 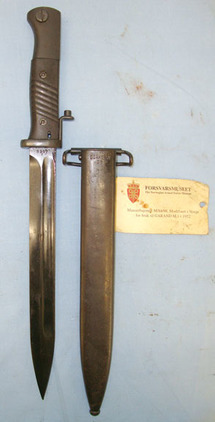 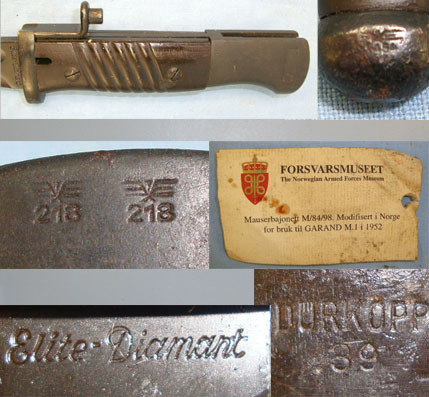 These bayonets were captured Nazi K98 bayonets converted to fit M1 Garand rifles supplied by the USA between 1950 & 1963 under the Military assistance programme. The USA provided 72,801 rifles during the programme. Norway converted 30,000 M1894 Krag bayonets to fit the Garand but it was not until 1952 that only 5,000 K98 bayonets were converted making our example a rare find. The bayonet by the German manufacturer Elite Diamint is in its 1939 dated Durkopp manufactured scabbard. The bayonet has an extension to fit the gas plug on the Garand. The blade retains of all of its original blueing. The back of the blade is dated ‘37’ (1937) & the hilt carries 2 Nazi waffenamt. The Bakelite grips are undamaged. The scabbard has an American style belt bar welded to its back. The ball end of the scabbard is waffenamt. The bayonet comes with its original label of the Norwegian Armed Forces Museum stating that it was modified in 1952 for use on the Garand M1 rifle (see White & watts item No. 535 pages 230 & 238. The price for this rare bayonet includes UK delivery. Sn 16194