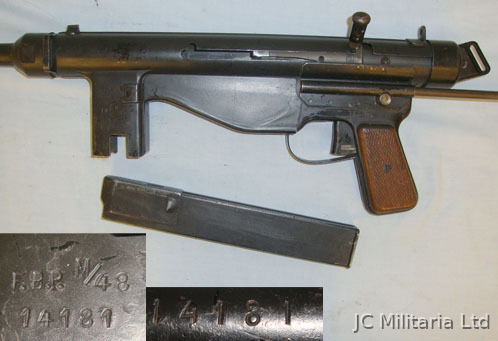 
**This Firearm is deactivated to one of the pre- 2nd May 2017, UK specifications. As such it can only be sold and exported in its present state to customers in NON- EU countries including the Isle of Man and Channel Islands. Customers based in the UK & other EU countries can purchase on our lay-away scheme. The weapon will then be brought up to the EU specification and the relevant certificate obtained prior to the transfer of ownership and delivery**.This is a 9 mm submachine gun originally developed from a design first conceived in 1940 by Gonçalves Cardoso, an officer of artillery in the Portuguese Army. The submachine gun was produced by the Fábrica de Braço de Prata weapon factory at Lisbon, whose initials FBP gave the name to the weapon. It utilized the large bolt and telescoping operating spring of the German MP40 submachine gun, and the collapsible wire stock of the American M3 submachine gun. The onset of World War II halted development of the weapon, which was further modified and put into production in 1948. The original version of the submachine gun the FBP M/48 only allowed for fully automatic fire. An upgraded version designated FBP m/63 introduced in 1961 also allowed for semi-automatic fire. The weapon was primarily issued to officers and NCOs in the Portuguese Armed Forces and security forces, along with quantities of ex-German MP 34 submachine guns. In Portuguese service it was used in combat in Angola, Portuguese Guinea, Mozambique, Portuguese India and Portuguese Timor. It was eventually replaced in service by the 9 mm Uzi and the collapsible-stock version of the standard m/961 G3 rifle. This is an excellent, original FBP M/48 9mm, sub machine gun. This example has excellent metal work throughout, with sling bars & sliding collapsible stock that fits snugly and functions perfectly as it should. This M/48 has original chequered wood grips. The magazine housing is stamped with FBP M/48 designation and number 14181 which is repeated on the barrel. Deactivated to early UK specification in 1996 the weapon cocks & dry fires with a strong spring action. The removable magazine has no internal spring or loading plate. The price includes deactivation certificate & UK delivery. D 1497
£595.00...Read full description
CategoryDeactivated
SubcategoryMachine Guns
ConditionUsed
Price£ 595
Sale typeTrade
MakePortuguese Military FBP M/48 (Model 1948) 9mm Calibre Sub Machine Gun With Colla
Calibre9 mm
ModelFBP M/48 (Model 1948) 9mm Calibre Sub Machine Gun With Collapsible Sling Stock
MechanismDeactivated
CertificateNo Licence
Your referenceD 1497