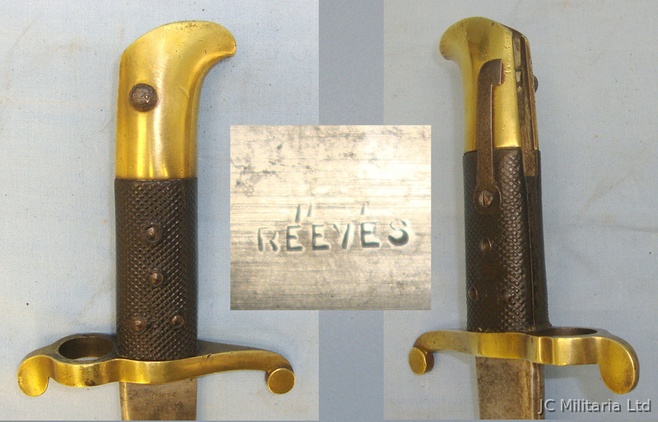 British Sappers and Miners Units adopted an oval barrel rifle in 1855 and produced their own distinctive bayonet with a Falchion or pipe backed blade. The leather scabbard had brass fittings. After 1857 the Sappers and Miners were renamed the Engineers so the blade is sometimes called the Engineers Bayonet. After removal from Engineer service they became a side arm particularly for the Medical Corps. Early examples had a leaf spring secured by a rivet but post 1858 the springs on these bayonets were secured by a screw. The British Government ordered quantities of these bayonets from German manufacturers & both the London and Birmingham trade (see pages 121-124 and item B160 of British & Commonwealth Bayonets By Skennerton). This is an excellent original example of the 1855 Lancaster bayonet. It has the correct 24”pipeback blade which has just light staining consistent with age, brass cross guard with muzzle ring and brass pommel with correct flat steel spring bar with post 1858 retaining screw and push button which works as it should. The blade is marked by the English maker ‘Reeves’. There are no visible dates or unit marks. Its original black hard leather grips are undamaged and correctly secured by rivets. The bayonet measures 29” overall and is complete with its original leather scabbard with brass locket and large brass chape. The leather is undamaged. The price includes UK delivery. Sn 18825