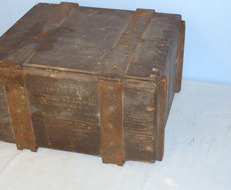 
This is a very rare and original Rankin Anti-Aircraft Explosive Darts ammunition box that contained 50 Rankin darts. The Aerial Anti Zeppelin Ranken Exploding Dart was an air-dropped weapon invented by Commander Francis Ranken of the Royal Navy in 1915 for the purpose of destroying or damaging the German Zeppelins which were attacking Britain at the time. Ranken darts were designed to burst the canvas skin of the balloon, drop inside and when the vanes snagged the canvas. The dart was dropped from a height of up to 700 feet. It was later determined the best altitude to attack the low-flying German zeppelins was between 300 to 400 feet. The Rankin dart was a 1 lb. explosive missile shaped flechette type one-pound bomb) 12long steel-tipped exploding dart with four pivoting vanes at the tail which was commonly carried in packs of 24 darts. These could be dropped individually or all at once. Aircraft equipped with Ranken darts needed to climb above their targets, such as Zeppelins, before dropping them from above. The weapon was put into service in February 1916. Ranken darts became obsolete with the advent of .303 incendiary ammunition fired from Vickers and Lewis guns mounted on fighter aircraft. This substantial well-made box, (measuring 45cm x 26cm x 39cm) is painted black and is strapped round with two steel straps which form part of the hinge for the lid as well as a pin locking joint opposite the hinge. The hinges are held on by brass slotted wood screws. The base of the box is screwed to the sides. The box is stenciled in white on the lid EXPLOSIVE RANKIN DARTS CLASS VI. DIV III FROM MERRICKS & Co ROSTIN FILLED EXAMINED . There is also the number 1494 stenciled on the top right of the lid. Inside the lid is a white paper label 12h by 6h which is part masked by staining which says ANTI-AIRCRAFT DARTS (Ranken) together with handling instructions including these arts must not be tampered and loading instructions (see photo). The price for this very rare WW1 item includes UK delivery. O 1281
£575.00...Read full description
CategoryAccessories
SubcategoryAmmunition
ConditionUsed
Price£ 575
Sale typeTrade
Manufactured YearWW 1
Your referenceO 1281
Recommended UsageCollection item