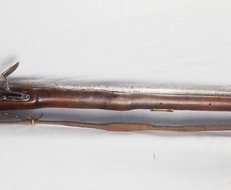 
This is probably the last remaining example of a Brown Bess musket issued to an international regiment of French, Dutch, Belgian and American monarchy loyalists during the Napoleonic wars.

Royal Liégois was a French line infantry regiment raised in 1787 and renamed 101st in 1791.

The regiment had been formed again by the French loyalists in exile.

This French Royalist Emigre Regiment, which was in British service between 1794 and 1801, was comprised of volunteers from a few countries. After the first defeat of Napoleon if re-entered the under the French command and became the Royal Etranger Regiment.

In 1815 the regiment was renamed Légion Royal Etranger by the Royal Ordinance of 6th September 1815 and it was amalgamated with the remains of the 8 foreign regiments raised by Napoleon during the Hundred Days.

The regiment was renamed a number of times (1816, 1821), dissolved on 5th of Jan 1831 and split in two. Half became the 21e Régiment de Infanterie Légère and the other half along with volunteers from the Garde Suisses created on 9th March 1831 the Légion Etranger (French Foreign Legion).

The barrel is stamped with a pair of Georgian proof marks and letters the RW.

The tang of the barrel is marked "RL" and "8". Number 8 is also stamped on the stock but brass plate and on the brass trigger guard. The guard also bears a sort of a Fleur-de-lis mark.

The lockplate is stamped "Tower" and GR beneath the crown.

The piece comes with a period leather sling.

The musket needs a new spring as it can only be half-cocked.

The metalwork has been cleaned at one point in time for preservation purposes.

UK postage is £25, international at cost and it can be viewed in our shop.

In our community section
More about this: From Father to Son - The BSA Ultra
Display map