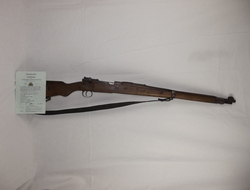 
The Weimar Republic, the successor state to the German Empire, implemented a program designed to update their remaining supplies of Gewehr 98 rifles for the Reichswehr in the years following World War I.

The updates to Weimar-era Gewehr 98's often included the replacement of the Lange Visier rear sight with a standard Karabiner 98k-style rear sight, a hole cut through the side of the stock to accommodate a K98-style side mounted sling system and sometimes a shortening of the barrel to K98 length. The Gewehr 98s were also sometimes stripped for their receivers and Karabiner 98k rifles were built on those receivers.

The chamber and the bolt come from a Gewehr 98 model made by Mauser-Oberndorf in 1917 and the barrel and stock from a Karabiner 98a (K98a). The “L” -shaped stacking rod attached nearby the muzzle in order to fit the long WW1 bayonet was removed to accommodate the small police type bayonet.

The removal of the old chamber and curved bolt were done due to the fact that the K98a used the M/88 cartridges and the new standard cartridge was the one used by the Gew98, the 7.92×57mm Mauser one.

The rifle saw a long service, being used by the Nazi forces as well, as can be clearly seen due to the “Waffen28/280” stamps on the bolt’s lock.

The camber is stamped on the top “ Waffenfabrik Mauser A.G. Oberndorf A/N 1917”. Its left side is stamped with the Weimar Republic eagle and the serial numbers “4070d” and “Gew98” and the opposite side bears four imperial proof marks.

The bolt is stamped with serial “286” on its body and on the base of the lever.

The muzzle metal ring that keeps the woodwork attached to the barrel is stamped in two places with “88” and in one place with what looks like a Weimar eagle.

The karabiner comes with its new specifications deactivation certificate dated 08/06/05 and with its leather carrying strap.

Giving is extremely long service the rifle is in good condition. The wooden work is scratched, nicked, chipped and has some cracks including a glued repair over the muzzle. The metalwork has the expected aging signs but except for a few superficial pits is in good order.

The mechanism works as intended.

The leather strap has some aging signs but has no tears.

In our community section
More about this: The Marocchi Evo Shotgun
Display map