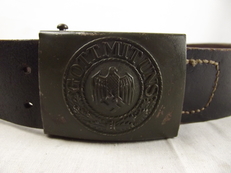 
This is a good example of a German Nazi WW2 belt & buckle of steel construction and painted in green with the Wehrmacht Eagle tab which was worn by all regular troops of the German Heer during WW2.

The belt is made out of brown and black leather with fourteen adjustment holes.

The German belt buckle came into existence in 1936 after the end of the Weimar Republic although the style itself was kept the same. The new buckles adopted the Wehrmacht Eagle and were worn throughout the Heer in different colours, dependant on the theatre of war and the uniform it was to be worn with.

The belt buckles of the Third Reich came in a variety of designs. There were over 100 different types developed. Even the non-military belt buckles often displayed the swastika as a means to show support of the Nazi party.

The high quality and intricate designs have made the German belt buckles of World War Two a desirable military collectable.

Originally the buckles would have had the leather tab attached which would be stitched to the belt however in later years this was dropped to save leather. There was a difference between what people would class as an "Early War" buckle and a "Mid - Late War" and that was the finish, the early buckles tended to have a pebbled finish around the Emblem whereas the later buckles were a smooth finish although pebbled buckles were still produced until the end of the war by some manufacturers. This buckle has a pebbled finish which indicates an "Early War" model.

The motif is slightly domed and features the Heer eagle and "GOTT MIT UNS" (God with Us) as well as the oak leaves on the bottom and a twisted rope border. To the rear of the buckle are the twin prongs on the right side for attaching to the belt itself and the catch on the left side.

Some of the leather material has become detached and lost through time and there are some scratches on the buckle but the item presents well.

UK postage is £15 or it can be collected from our shop.