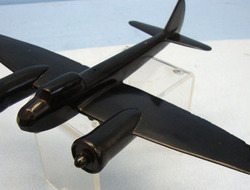 
During WW2, from late 1940, models were used extensively in aircraft recognition training programs. Models were of prime importance not only for their versatility in teaching but, as with enemy aircraft, they were often the only subjects ready available for the camera. Most of these models were made of wood, but also Bakelite and Buckram (a cloth like material mixed with a binder and pressed into a mould similar to a water-based version of ‘glass-fibre’ resin moulding) was being used. They were usually produced in 1/72 scale following the lead already set by the Sky Birds and Penguin models. Compared to the Penguins they were crude and less detailed, but that was satisfactory for identification purposes. They were usually painted in matt-black or matt-grey, an appropriate colour, as a real aircraft would appear in this manner when viewed from a distance. This is a Bakelite model of a German Junkers 88 and is finished in matt black. The Junkers Ju 88 was a German World War II Luftwaffe twin-engined multirole combat aircraft. Designed by Junkers Flugzeug- und Motorenwerke in the mid-1930s. The model would have been used by both RAF and the Army as ground gun crews also needed to positively identify enemy aircraft from a distance. Typically seen in films hanging in aircrew rooms and briefing rooms. These models didn't survive in great numbers. On the bottom it has a moulded "JU 88". It measures 10" wingspan. There is a small drilled hole through the centre of the fuselage which was to thread cord through to hang the model from the ceiling to replicate the model in flight. The price includes UK delivery. Sn 13246
£225.00...Read full description
CategoryAccessories
SubcategoryOther Accessories
ConditionUsed
Price£ 225
Sale typeTrade
Manufactured YearWW 2
Your reference13245
Recommended UsageCollection item

In our community section
More about this: The New GL43 General Licence