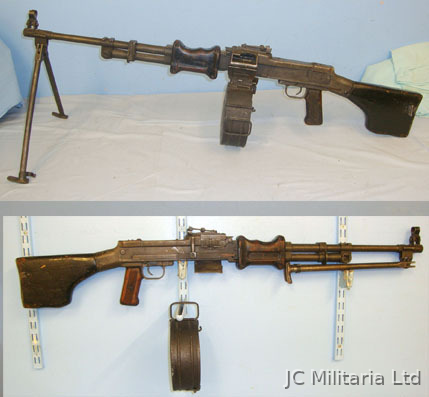 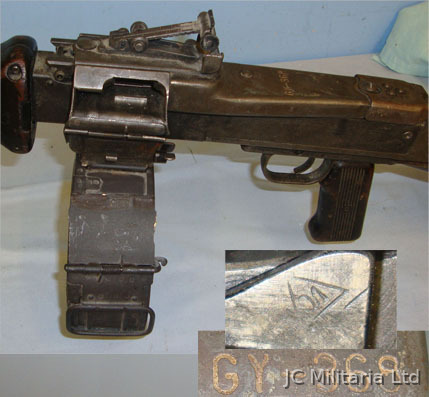 
***This Firearm is deactivated to one of the pre- 2nd May 2017, UK specifications. As such it can only be sold and exported in its present state to customers in NON- EU countries including the Isle of Man and Channel Islands. Customers based in the UK & other EU countries can purchase on our lay-away scheme. The weapon will then be brought up to the EU specification and the relevant certificate obtained prior to the transfer of ownership and delivery***The Russian Degtyaryov DP-28 machine gun (Degtyaryov's infantry machine gun) is a light machine gun firing the 7.62×54mmR cartridge that was used primarily by the Soviet Union starting in 1928. The DP had a reputation as an effective light support weapon. It was nicknamed the "Record player" (proigryvatel) by Red Army troops because the disc-shaped pan magazine resembled a gramophone record and its top cover revolved while the weapon was fired. Degtyaryov’s last variant of the DP-28 had a drum fed belt magazine (see page 201 of Machine Guns by Hogg). This is an excellent cold war era last variant Soviet Russian DP-28 with drum magazine. It has all original wood and metal work. It is complete with original bi-pod and original drum magazine. It has an adjustable tangent rear sight and winged fore sight. The LMG has matching numbers ‘GY-368’ on the frame, breech and barrel block. The weapon also has a small ‘triangle containing 01’ on the frame. There are no visible date or other manufacturer marks. The removable drum magazine is empty. The LMG measures 40 ¾” overall length. Deactivated to UK specification in 2011 the weapon’s slide and trigger move. The price includes deactivation certificate and UK delivery. Sn 18125:2
£975.00...Read full description
CategoryDeactivated
SubcategoryMachine Guns
ConditionUsed
Price£ 975
Sale typeTrade
MakeRussian
Calibre7.62 mm
ModelDP-28, 7.62x 54R Calibre Light Machine Gun With Drum Magazine & Bi-Pod
Manufactured YearFINAL VERSION**Cold War Era
MechanismDeactivated
CertificateNo Licence
Your reference18125:2