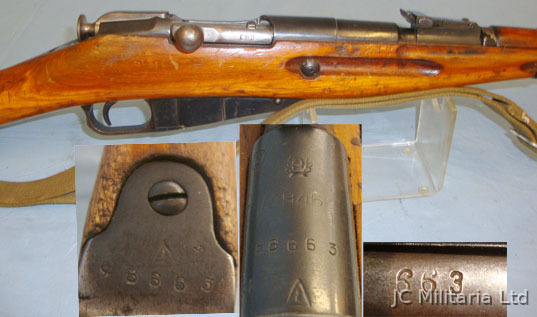 
**This Firearm is deactivated to one of the pre- 2nd May 2017, UK specifications. As such it can only be sold and exported in its present state to customers in NON- EU countries including the Isle of Man and Channel Islands. Customers based in the UK & other EU countries can purchase on our lay-away scheme. The weapon will then be brought up to the EU specification and the relevant certificate obtained prior to the transfer of ownership and delivery**The Mosin–Nagant is a five-shot, bolt-action, internal magazine-fed, military rifle, developed by the Imperial Russian Army in 1882–91, and used by the armed forces of the Russian Empire, the Soviet Union and various other nations. Towards the end of WW2 an increase in urban combat led directly to the development of the Model M44 Mosin Nagant carbine. In essence, the M44 is an M38 with a slightly modified forearm and with a permanently mounted cruciform bayonet that folds to the right when it is not needed. In spite of the age of its design these weapons have shown up in various conflicts around the world until the modern day, being rugged and effective, much like the AK-47 and its variants. This is an excellent original M44 Mosin Nagant carbine with integral folding bayonet & sling. It has undamaged metal work with even patina and all original wood furniture which has just the bumps and bruises to be expected. The Breech housing is stamped with Russian Script, Russian Izhevsk arsenal triangle with arrow mark, Hammer & Sickle and 1946 date (illustrated in image 2). The weapon is serial number ‘B663’ which is repeated on the butt plate tang, magazine plate and bolt. It has its original, adjustable rear sight, shrouded fore sight & cleaning rod. The carbine is fitted with a webbing & leather sling and has its original integral folding cruciform bayonet with typical chisel tip. The bayonets locking catch works as it should and the bayonet folds neatly and securely. Deactivated to UK specification in 2002 the weapon cocks & dry fires crisply. The price includes deactivation certificate and UK delivery. Sn 18196:28
£475.00...Read full description
CategoryRifles
SubcategoryBolt Action
ConditionUsed
Price£ 475
Sale typeTrade
MakeRussian Izhevsk Arsenal
Calibre7.62 mm
ModelALL MATCHING NUMBERS INCLUDING BOLT**WW2 Connections, 1946 M44 Soviet Russian Iz
MechanismDeactivated
CertificateNo Licence
Your reference18196:28
Gun StatusDeactivated
Recommended UsageCollection item

In our community section
More about this: 3 Guns you can do everything with.