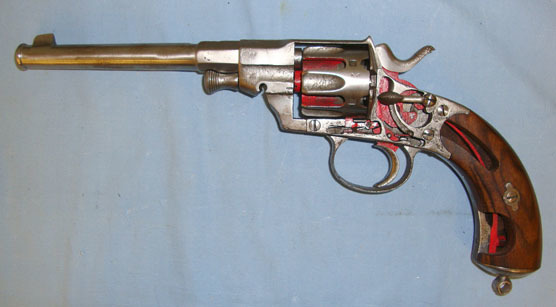 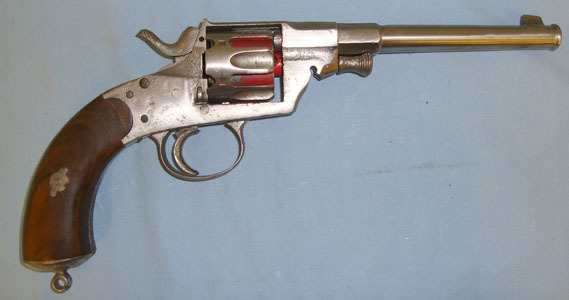 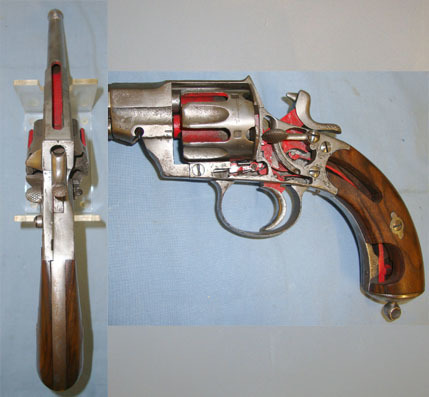 
The M1879 Reichsrevolver, or Reichs-Commissions-Revolver Modell 1879 and 1883, were service revolvers used by the Imperial German Army from 1879 to 1908, when it was superseded by the Luger. The two versions of the revolver differ only in barrel length (The M1883 had a 5-inch barrel). Although the design was dated, the weapon was extremely robust, and they were still used through World War I. The M1879 is referred to as the "cavalry model" and the M1883 as the "officer's model," by collectors, which were not official designations. Both models were single-action, solid frame, non-ejecting six-shot revolvers. This is an original M79 Cavalry model Reichs Revolver sectioned at some point in its life to display display the inside of the barrel, cylinders & firing mechanisms. It has the correct 7” round barrel stepped to octagonal at the breech. It measures 13 ½” overall and original wood grips, one of which is cut away to display the mechanism in the grip frame. All sectioned areas are highlighted in red paint. The pistol is single action. It cocks and dry fires & the cylinder indexes correctly. There are no manufacturer marks visible on the metal work which is in the white. The left side of the frame has a thumb operated safety lever which works as it should. The price includes UK delivery. NB As an antique obsolete calibre revolver which has been sectioned and is incapable of firing no licence is required to own this item in the UK if retained as part of a collection or display. Sn 17099:1
£950.00 Read more
CategoryPistol / Hand Guns
SubcategoryRevolver
ConditionUsed
Price£ 950
Sale typeTrade
MakeSECTIONED, ARMOURER’S INSTRUCTIONAL PIECE Imperial GermanM1879 Reichsrevolver
Read more
ModelModel 1879 (M/79) ‘Cavalry Model’ 10.6 mm Obsolete Centre Fire Calibre Reichs Re
Antiqueyes
CertificateNo Licence
Your reference17099:1
Recommended UsageCollection item