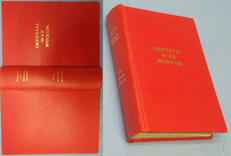 
This is a set of manuals covering infantry platoon weapons and they have been recently released form the library of the Imperial War Museum. The pamphlets cover the light machine gun, grenades, the 2” mortar, the anti-tank grenade, the 3.5 inch rocket launcher, sniping, exercising trained soldiers and fire control plus the theory of small arms fire. All of the manuals are profusely illustrate and most carry Imperial War Museum stamps. The manuals date from 1948 to 1953 and they come in an official hard backed cover with gold titling. The pamphlets have become disbound but this does not affect their condition and could easily be glued back in. this is an excellent se which was restricted at the time of issue and was not to be communicated to; the press of anyone not authorised .o receive it. The price includes UK. delivery. BO 340
£145.00 ...Read full description
CategoryAccessories
SubcategoryOther Accessories
ConditionUsed
Price£ 145
Sale typeTrade
Your referenceBO 340
Recommended UsageCollection item