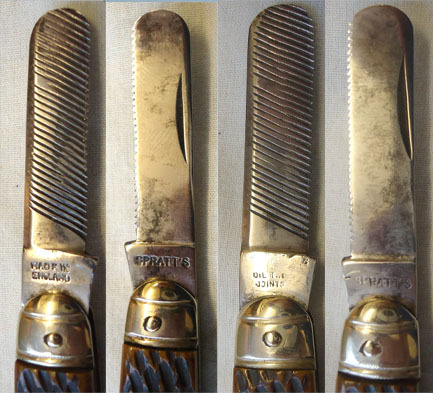 
This is a Sheffield made stag gripped curry comb knife made for Spratts dog foods. The knife was made circa 1918 and was used for dog grooming. Both blades are marked SPRATTS with one having ‘MADE IN ENGLAND’ and the other ‘OIL THE JOINTS’. There are several versions made with various teeth types, (see The heritage of English Knives by David Hayden-Wright, page 56 for 2 similar knives). This is an unusual pocket knife and not seen very often these days. The price includes U.K. delivery. ED 2492
£145.00Read more
CategoryBlades
SubcategoryKnives
ConditionUsed
Price£ 145
Sale typeTrade
MakeSheffield Made ‘Spratts’ Advertising Pocket Knife
Read more
Manufactured Yearcirca 1918
Your referenceED 2492