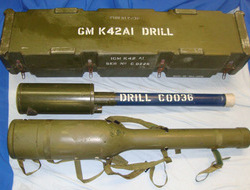 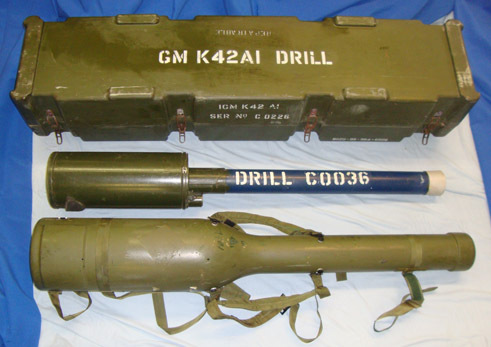 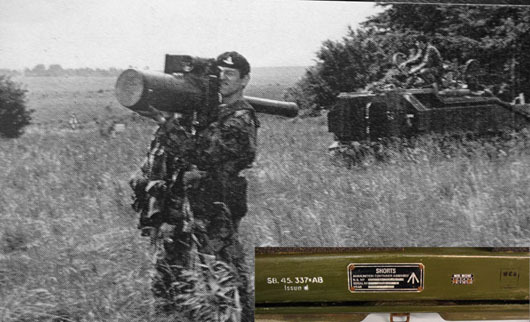 The Shorts Blowpipe is a man-portable surface-to-air missile that was in use with the British Army and Royal Marines from 1975. It was superseded by an interim design, Javelin, and later the Starstreak. The missile would be shipped as a single round in a storage cylinder/firing tube. The aiming unit would be clipped to the launch tube and fired from the operator's shoulder. To reduce the overall size of the container, the rear fins of the missile were stored in the larger diameter cylinder at the front of the tube (this also contained the Yagi antenna for transmitting guidance signals). During firing, the fins slipped onto the rear of the missile as it flies through and are held there by heat-activated adhesive tapes. This gives the launch container a unique shape, seemingly oversized at the front and extremely thin at the rear. Blowpipe were used by both sides during the Falklands War in 1982, with the targets being fast flying aircraft, flying low and using the ground to hide their approach. Blowpipe missiles were also used in the Afghanistan and Gulf War conflicts. This is a superb complete inert, purpose made, WD weighted drill Blowpipe firing tube, with carry and transit cases. The drill Blowpipe tube is weighted to replicate the weight of the live version when loaded with missile and cable. This would allow soldiers the opportunity to train in carrying a full size and weight inert version of the weapon and aiming (when guidance system attached). The tube is marked ‘C0036 DRILL ‘ and is complete with its original green high impact plastic carry case with webbing shoulder and retaining straps and both are contained in its original green high impact transit case with removable lid and clasp fasteners. The transit case and carry case are profusely marked with stenciled British WD marks and NATO stores codes. A WD plate on the transit case is dated ‘1976 ‘ (illustrated inset in image 2 together with an image of a blowpipe missile in use in the field). The Blowpipe is accompanied by an MOD certificate dated 1988 certifying that the Blowpipe is inert/ free from explosives. The blowpipe in its transit case measures 61”x12 ½”x 14”. Due to the size and heavy weight of this item delivery will be by arrangement and at cost. O 1003