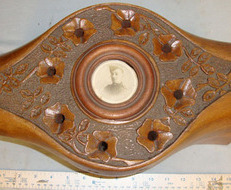 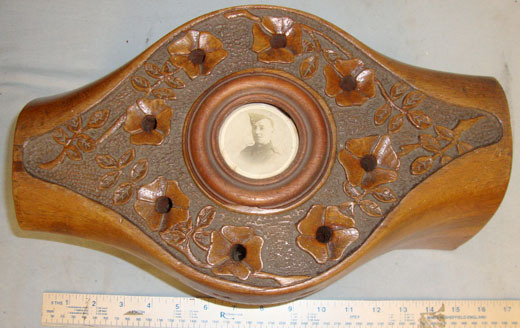 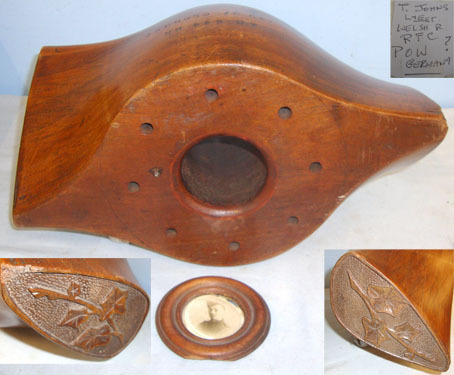 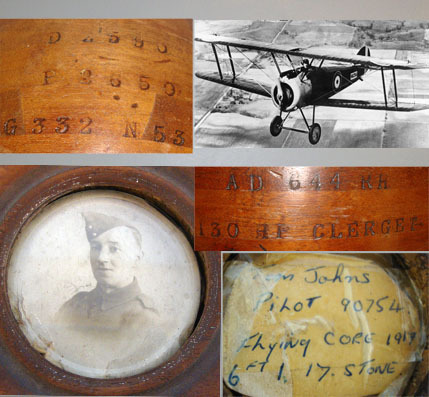 
This is an excellent WW1 British Fighter Aircraft Propeller Boss period converted into a memorial / commemorative piece. The original wood propeller boss is undamaged and measures 13 ½” x 8” x 6 ½”. The centre of the boss snugly houses the removable contemporary glazed photograph Portrait of an RFC pilot in Uniform. The rear of the photo has a paper label hand written indicating that the image is that of ‘Tom Johns Pilot 90754 Flying Corps, 1917, 6ft 1 17 stone’ (a small handwritten note with the piece also reads ‘Lieut T.Johns Welsh R RFC POW Germany ?’ we do not know if this is the same individual. The wood framed portrait is push fitted into the boss and can be removed easily for inspection/ cleaning. The Boss has its original aircraft mounting holes and original impressed numbers which may assist to identify the aircraft from which the boss was recovered. Amongst the numbers is ‘130 HP Clerget’ (Clerget was the name given to a series of early rotary aircraft engine types of the World War I era that were designed by Pierre Clerget. Manufactured in both France by Clerget-Blin and Great Britain by Gwynnes Limited they were used on such aircraft as the Sopwith Camel & Pup. A contemporary image of a Sopwith Camel in flight is illustrated inset in image 2). The front and sides of the boss are beautifully hand carved with deep foliate decoration. The price for this excellent WW1 aviation piece worthy of further research includes UK delivery. Sn 15122:2
£395.00 ...Read full description
CategoryAccessories
SubcategoryOther Accessories
ConditionUsed
Price£ 395
Sale typeTrade
Manufactured YearWW 1 era
Your reference15122:2
Recommended UsageCollection item