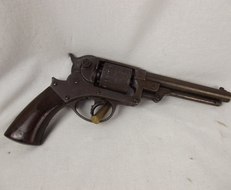 
Here we have one of my favourite and most interesting pistols of the mid Victorian or American Civil War period.

The Starr Arms Double Action was a brilliant innovative design that was made to get around the Colt monopoly on revolving firearms by utilising the idea without infringing on the patent.

This model actually uses dual triggers to allow the shooter to fire the weapon without first pulling the hammer back by hand. The front trigger cocks the hammer and rotates the cylinder. There is an adjustable lug attached to the rear side of the front trigger that engages the rear trigger which is located in the rear of the trigger-guard which in turn, releases the hammer. The Model 1858 with its rather novel double action, unfortunately, was a design whose time had not yet come and was prone to breakage due to the more intricate design over the single action revolvers.

This revolver, in particular, has its original walnut grip and all steel frame and barrel. The barrel is still nice and crisp with a working action.

The pistol is in good condition for its age with some minor pitting in some areas, the rifling is crisp and nice with lots of the pistols original dark finish remaining.

In our community section
More about this: Remington is ready to fall into administration aft...
Display map