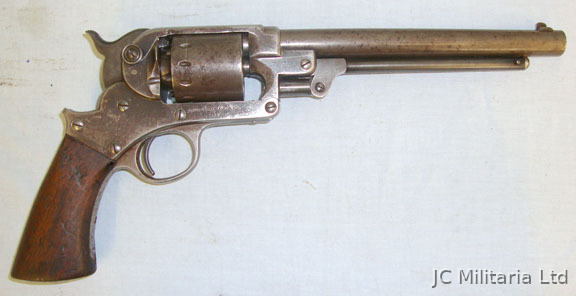 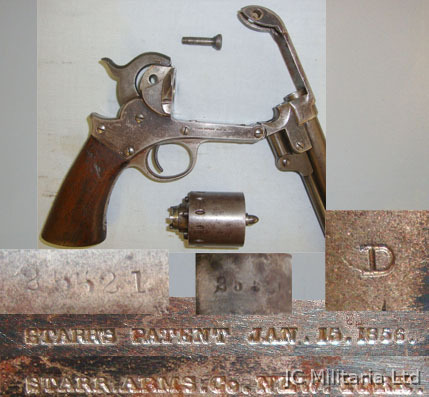 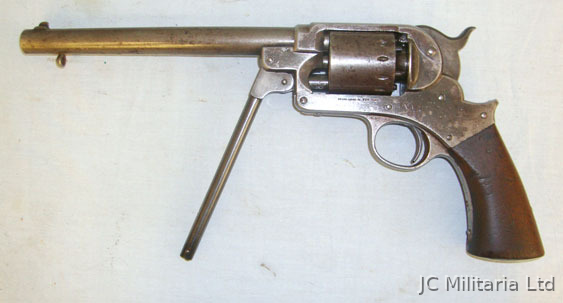 
This is an original American Starr 1856 Patent single action Army Revolver in .44 calibre. Starr produced double action revolvers used in the American Civil War until the U.S. Ordnance Department persuaded the Starr Arms Co. to create a single-action variant. The company eventually complied, and the Union acquired 25,000 of the single-action revolvers for $12 each between January 1862 and May 1863. This single action example has even patina. It has an 8” round steel barrel (13 ½” overall length) and has a captive steel loading lever. The barrel has a letter ‘D’ factory inspector’s mark. The barrel’s bore is near mint clean and bright with crisp rifling. The frame is crisply stamped with manufacturer and patent detail (illustrated in image 2). The weapon has a blade fore sight and notched hammer rear sight. The cylinder and frame under the hammer have matching numbers ‘25521’. The one piece walnut grip is original and undamaged. The action works crisply. This is a scarce American Civil War period revolver. The price includes UK delivery. NB As an antique percussion revolver no licence is required to own this item in the UK if retained as a part of a collection or display.
PLEASE LOOK AT THE ANTIQUE SECTION ON MY WEB SITE LARGE COLLECTION JUST LISTED. www.jcmilitaria.com