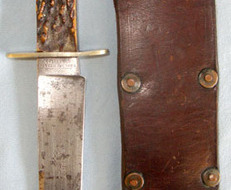 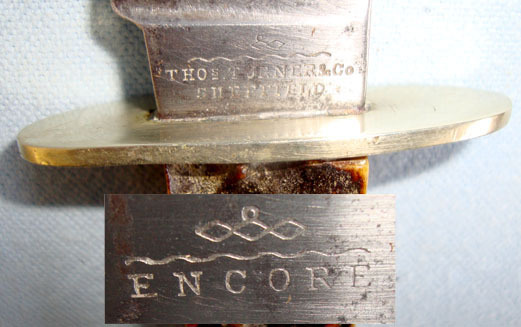 At the end of the 19th century, Thomas Turner was one of the most important cutlery firms in Sheffield. The company was founded in 1802. By 1822, it was listed in a Sheffield directory in Norfolk Street. The company mixed steel and tool manufacture with cutlery, and also operated as a merchant. The owner was Thomas Turner, living at East Bank. After he died on 5 March 1845, aged 61, the business passed to his eldest son, also named Thomas. The latter had been born on 10 January 1829. His brothers, Benjamin Thorne and William Thorne Turner, also became partners. By the 1850s, the company's reputation was secure. In 1851, it won a Prize Medal at the Great Exhibition. Sometimes Turner stamped several slogans on each knife. Aside from the slogans, Turner's used the trade mark "Encore"(granted in 1805). This is a very good Victorian era English ‘Encore’ Bowie by Thos (Thomas) Turner & Co. It has undamaged stag horn scales & German Silver cross guard. It has a 6” single edged, deep swept Bowie blade, marked by the manufacturer ‘Thos Turner & Co Sheffield’ and with ‘Encore’ trademark. It measures 10” overall length. It has a riveted & stitched brown leather sheath. All leather, rivets & stitching of the sheath are intact. The price includes UK delivery. Sn 14445