This new rifle from Tokyo Marui has an aluminium receiver with a CNC aluminium 170mm RAS handguard. This has a 215mm outer barrel with a standard flash hider. This has flip up front and rear sights and comes with a 30 round magazine. This rifle is equipped with TM's new version 2 Shoot & Recoil engine and has an ambidextrous fire selector. This also has a bolt lock function which stops the gun from firing after the last BB is fired. This has a new 2 way battery system. The battery can either be fitted on the front handguard with a PEQ box (not included) or fitted and plugged inside the magazine which contacts the gearbox when the magazine is inserted into the gun.

Please note, this does not come with a battery or charger.

In our community section
More about this: Daystate Huntsman - The Revere 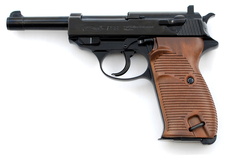