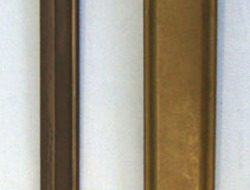 
The M1917 bayonet was used first during World War I by American soldiers on the Western Front. A sword bayonet design, the M1917 bayonet design was based on the British P1907 bayonet, which incorporated a long 17-inch blade. While designed primarily for the M1917 rifle the bayonet was fitted for use on all the "trench" shotguns at the time. According to M.H. Cole this bayonet was manufactured in the 1960's (Vietnam Era) for shotguns to be used for guard and riot duty. They were produced in Canada by General Cutlery & Canada Arsenal. (see Bayonets From Janzens Notebook, Page 224 No 1 & Keisling Page 588 no 892). The bayonet is stamped under the crossguard with "US M1917 CA" denoting Canadian Arsenal Manufacture and the 'Eagle' with 3 x Stars for 'US Acceptance'. The grips are black composite secured with two screw bolts and it has a parkerised 16 3/4" long blade which is fullered. The scabbard is in excellent condition and has "US M1917 B.A. Inc" stamped into it. It has a wire belt hanging clip. This is a rare bayonet. The price includes Uk delivery. Bayo 29
£375.00 Read more
CategoryBlades
SubcategoryBayonets
ConditionUsed
Price£ 375
Sale typeTrade
MakeU.S. Model 1917 Service Isuue Bayonet & Scabbard For Shotguns
Read more
Manufactured YearVietnam War Era
Your referenceBAYO 29
Recommended UsageCollection item