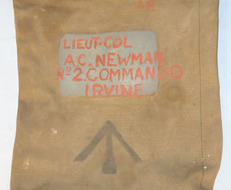 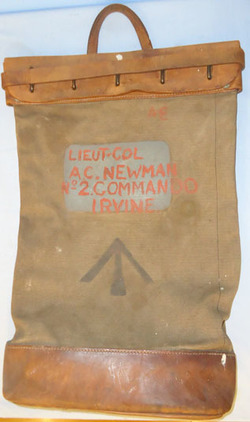 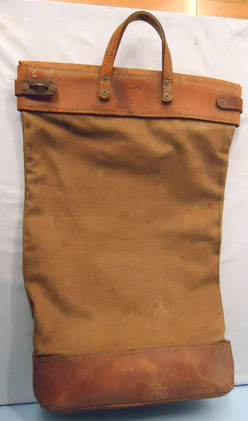 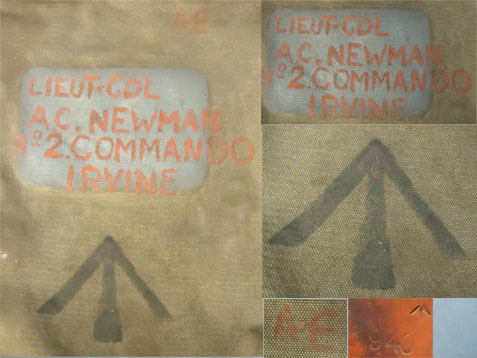 
This is an original British WW2 1940 dated air drop Valise constructed from hide & webbing. The valise has a leather carrying handle and a padlock staple on the rear of the bag to secure it. The bag is stamped on the back of the top leather 1940 (1940 date) and a large WD crowfoot. There is also a large black WD crowfoot stencilled in black on the front of the canvas bag. The bag has contemporary painted grey square on the front named to LIEUT. COL A.C. NEWMAN No 2. COMMANDO IRVINE. The bag also has a red painted AE near the top flap on the front. This type of bag was used in air drops due to the ruggedness of its construction to carry maps, plans and other essential kit. Lieutenant Colonel Augustus Charles Newman attached to No. 2 Commando during the Second World War and on the 28 March 1942 in the attack on St. Nazaire, France, Lieutenant Colonel Newman was in charge of the military forces and he was one of the first ashore, leading his men and directing operations quite regardless of his own safety. Under his inspiring leadership the troops fought magnificently and held vastly superior numbers of the enemy at bay until the demolition parties had done their work. The colonel then attempted to fight through into open country and not until all the ammunition was spent were he and his men overwhelmed and taken prisoner. Newman was later awarded the Victoria Cross for his part. This bag is worthy of further research and the price includes U.K delivery. MISC 871
£395.00 ...Read full description
CategoryAccessories
SubcategoryOther Accessories
ConditionUsed
Price£ 395
Sale typeTrade
Manufactured Year1940 Dated
Your referenceMISC 871
Recommended UsageCollection item