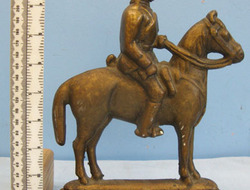 
This is a contemporary door stop of Lord Kitchener who won fame in 1898 for winning the Battle of Omdurman. thus securing control of the Sudan. For this he was given the title 'Lord Kitchener of Khartoum'. As Chief of Staff in the second Boer war, he played a key role in Lord Roberts Conquest of the Boer Republics. He then succeeded Roberts as Commander in Chief. After spells in India and Egypt he returned to Britain and in 1914 became Secretary of State for War. His face was well known on the famous @Your Country Needs You' posters. He died on 5th June 1916on H.M.S. Hampshire when the ship struck a German mine. This is a nice contemporary door stop of a National hero. It is in very good condition and undamaged. The price includes UK delivery. Misc. 858
£125.00 ...Read full description
CategoryAccessories
SubcategoryOther Accessories
ConditionUsed
Price£ 125
Sale typeTrade
Manufactured YearVictorian
Your referenceMISC 858
Recommended UsageCollection item