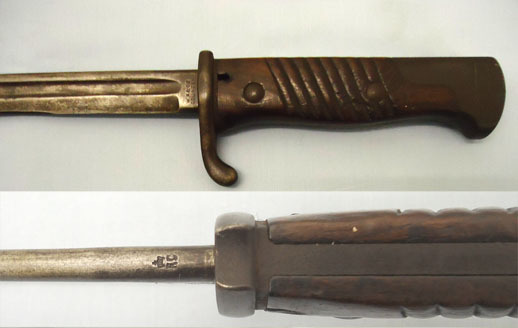 
This is a nice Seitengewehr M1898 pipeback bayonet for the Mauser M98 rifle which was the principal arm of the German army in W.W.1. The Model 1898 Bayonet was the Imperial German response to the French 1886 Lebel narrow bladed bayonet. The blade is stamped W.K &CIE SOLINGEN (Weyersberg Kirschbaum, Solingen) and carries their trademark. The spine of the blade carries a crow n over RC instead of the usual crown over the date. Anthony Carter in his book German Bayonets states that this is thought to be a repair mark similar to the British crowned BR (Birmingham Repair). The RC stands for ‘Revisions Controlle’ . There is no evidence of any repairs to this bayonet and Carter states that it was probably used when grips were replaced or muzzle rings which had been damaged and were re-sharpened, these being the commonest reasons for bayonets to be re-furbished. The bayonet has a 20 ½” pipeback blade with swell point tip and a central fuller, a steel crossguard with upswept quillon and grooved slab wood grips. The steel pommel release button functions correctly. The scabbard is a steel mounted black leather version with minor dents but no damage. This is a scarce M1898 bayonet with the crown over RC This is the first of these bayonets we have seen. The price includes UK delivery. BAYO 574
£345.00Read more
CategoryBlades
SubcategoryBayonets
ConditionUsed
Price£ 345
Sale typeTrade
MakeWeyersberg Kirschbaum, Solingen
Read more
Manufactured YearWW1 era
Your referenceBAYO 574