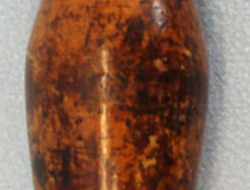 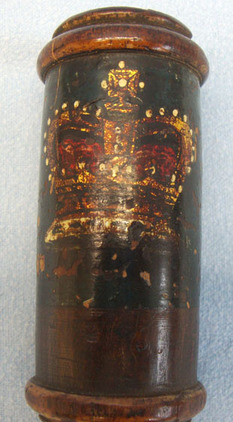 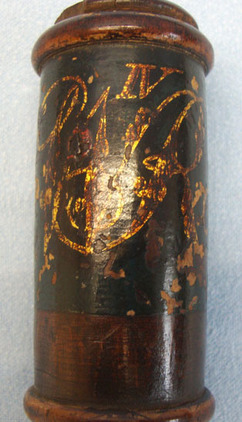 The earliest record of the Tipstaff (Warrant Stick) was in the 14th century. The name derives from the early origins of Policing when Warranted Officers would apprehend a criminal with the help if necessary of a tipped staff. The staff would be made of wood or metal and were not only a means of self defence but the tips of the staffs would bear symbols of their authority. Modern Police Truncheons originated from these Tipstaffs. This is an excellent original William IV Tipstaff. William IV was King of the United Kingdom of Great Britain and Ireland and King of Hanover from 26 June 1830 until his death in 1837. It is made from Yew and has a very nice patina. The body is tapered and shaped for grip. The bottom has a three groove turning. The top of the staff has what we believe to be a contemporary lead insert to weight the tip staff. The staff has beautiful hand painted decoration featuring a Crown and Royal Cypher. All of the staff’s Gold, Red and white decoration can be seen. It measures 12" long. The price includes UK delivery. Pol 393