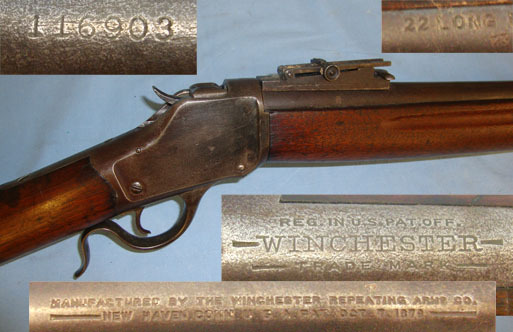 
**This Firearm is deactivated to one of the pre- 2nd May 2017, UK specifications. As such it can only be sold and exported in its present state to customers in NON- EU countries including the Isle of Man and Channel Islands. Customers based in the UK & other EU countries can purchase on our lay-away scheme. The weapon will then be brought up to the EU specification and the relevant certificate obtained prior to the transfer of ownership and delivery**. The Winder musket was a .22 calibre training rifle used by the U.S Army in the early 20th Century. The weapon was the brainchild of Colonel C. B. Winder, who advocated marksmanship training with a rifle of similar size and weight to a service rifle but chambered in .22 rim fire, which was both economical and suitable for indoor ranges. The Winder Musket was based on the Winchester Model 1885 single shot rifle. Although it was never officially referred to as the Winder musket, the weapon was informally named in honour of Colonel Winder, and has since generally been referred to as the Winder musket. The Winder Musket was superseded by the 1922 Model bolt-action training rifle. Winder Musket serial number records are sketchy having several gaps in the record log. Winders made in 1918 and 1919 were given the designation ‘Model 87’. This is an excellent original example of the Winder Musket. It has Winchester 1879 Patent information on the barrel together with calibre detail and manufacturer trade mark stamped on the top steel action tang. It is serial number ‘116903’ (all illustrated). It has a 28” round steel barrel (43 ¾” overall), an adjustable rear target sight and block & blade fore sight. It has a steel butt plate, fore end block, barrel bands and sling swivels. The metal has even patina. The Musket has excellent all original undamaged wood work which has just minor bumps and bruises consistent with age and use. It has an external hammer. Deactivated to UK specification in 2003 the weapon’s falling block and firing mechanism work crisply. The price includes deactivation certificate & UK delivery. D 1520
£895.00 Read more
CategoryRifles
SubcategoryLever Action
ConditionUsed
Price£ 895
Sale typeTrade
MakeWinchester
Read more
Calibre.22
Model1879 Patent (Mod 1885) ‘Winder Musket’ .22 Long Round Calibre Falling Block Sing
Manufactured YearPre 1918
MechanismLever Action
CertificateNo Licence
Your referenceD 1520
Gun StatusDeactivated

More about this
Who Invented the Rifle?