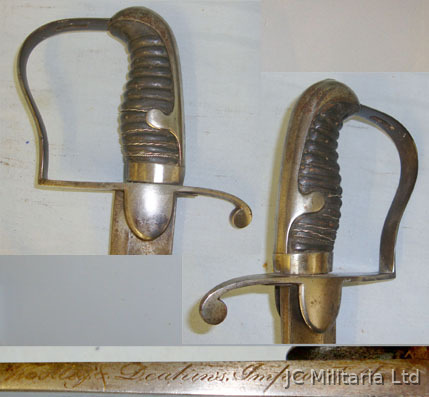 
Woolley & Deakin of Birmingham produced their 1796 pattern sabres especially for the looming 100 Days War in March and April 1815, after the Congress of Vienna declared Napoleon an outlaw after his escape from his first exile to the Elba, and the Allies mobilised their armies accordingly. The Pattern 1796 Light Cavalry Sabre was used primarily by British Light Dragoons and Hussars during the Napoleonic Wars (see page 77 of World Swords by Withers). The blade is remembered today as one of the best of its time and has been described as the finest cutting sword ever manufactured in quantity. Officers of the famous 95th Rifles, Light Infantry Regiments and the "flank" Companies of Line Regiments adopted these Swords (The Hit Peninsular War, Book & TV series Sharpe's Rifles featured this pattern of Sword). This original 1796 Sabre by Woolley & Deakin is in good condition for its age. It has a single edged, fullered 33” Sabre blade (37 ¾” overall). The blade is undamaged & has just staining consistent with age. The back of the blade is signed by the manufacturer ‘Woolley & Deakin's Improv’d Steel’. Its cross guard with rounded langets, knuckle guard, pommel and ribbed grip are good condition . The ribbed wood grip has traces of its original leather covering and some original wire binding is present. The Sabre is complete with its original steel scabbard with 1 hanging ring (the 2nd is absent). The sword fits the scabbard tightly. The scabbard has even patina with no cracks or dents. The price for this Napoleonic Wars era Cavalry Sword by a quality maker with Scabbard includes UK delivery. ED 2553
£975.00...Read full description
CategoryBlades
SubcategorySwords
ConditionUsed
Price£ 975
Sale typeTrade
MakeWoolley & Deakin's (Birmingham)
Manufactured YearNAPOLEONIC PENINSULAR WARS ERA
Your referenceED 2553